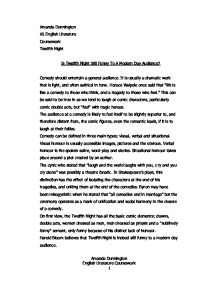 Is Twelfth Night Still Funny To A Modern Day Audience?

Amanda Dunnington AS English Literature Coursework Twelfth Night Is Twelfth Night Still Funny To A Modern Day Audience? Comedy should entertain a general audience. It is usually a dramatic work that is light, and often satirical in tone. Horace Walpole once said that "life is like a comedy to those who think, and a tragedy to those who feel." This can be said to be true in as we tend to laugh at comic characters, particularly comic double acts, but "feel" with tragic heroes. The audience at a comedy is likely to feel itself to be slightly superior to, and therefore distant from, the comic figures, even the romantic leads, if it is to laugh at their follies. Comedy can be defined in three main types; visual, verbal and situational. Visual humour is usually accessible images, pictures and the obvious. Verbal humour is the spoken satire, word-play and stories. Situational humour takes place around a plot created by an author. The cynic who stated that "laugh and the world laughs with you, cry and you cry alone" was possibly a theatre fanatic. In Shakespeare's plays, this distinction has the effect of isolating the characters at the end of his tragedies, and uniting them at the end of the comedies. Byron may have been misogynistic when he stated that "all comedies end in marriage" but the ceremony operates as a mark of unification and social harmony in the closure of a comedy. ...read more.

His almost-fierce smile also brings great mirth, as he is characteristically known for his solemn face. This appearance comes shortly after Maria's announcement that Olivia detests the colour yellow. Verbal humour also plays a huge part in this scene. Malvolio's repetition of the letter, which he clearly knows by heart, leads to Lady Olivia's extreme confusion. Her perplexed state of mind leads to an even greater farce, particularly when her concern generates a confused Malvolio to misinterpret her intentions. When Olivia requests that he "go(es) to bed", he assumes Olivia's intent is to join him and he reacts with such obvious glee that one can feel nothing but hilarity to the absurdity of the situation, yet possibly feel some sympathy for Malvolio, even though he is a truly detestable character. This show of supposed madness leads to the darker humour in Twelfth Night. Sir Toby locks Malvolio into a dark damp cell, and labels him "a madman". Malvolio's increasing fear can be said to be funny, as he is designed to be hated, and the final punishment of such a character can fill and audience with delight. Feste the clown dresses as a priest and talks to him, giving his standard nonsensical responses to Malvolio's questions. The said responses make Malvolio wonder at his own sanity, and this uncertainty again can lead to comedy. Although this scene can be classed as funny, as the visual humour of Feste's disguise, verbal humour of his riposte, and situational of the circumstance Sir Toby has put them in is present, the humour is morbid, and the audience is aware that they should not really find it amusing. ...read more.

His profound comic aspect comes from his astuteness. In one example he proves Olivia to be a true fool by asking her what she was mourning about. The point Feste tried to make was why was Olivia mourning for a person who's soul is in heaven? In Twelfth Night, the fools control the comedy and humour in the play. They assist in the make believe game and fool around with characters who "evade reality or rather realize a dream". Feste, Maria and Sir Toby are the fools that make the comedy work in many senses. They create the confusion through humour. Confusion is also brought from disguise, knowledge of character and basic malice. However, the main characters bring in their own comedy with self-devotion, masquerades and love for others who cannot return their passion. It contains all the situational, visual and verbal elements of comedy, along with satire, perplexity and commotion. Twelfth Night is, without a doubt, still funny to a modern day audience. It comprises all three main elements of comedy: visual, verbal and situational, and combines them with the follies of the comic double act, confusion of disguise and the ultimate love of all the characters. To any audience, 1601 or otherwise, Twelfth Night is an amalgamation of satire, confusion and fervour, ordained to entertain and interest a general audience. Today, a modern audience will still find the exploits of Sir Toby, Feste and Maria hilarious, still find the jokes droll, although some have lost their meaning over the centuries, and still revel in the visual aspect of Twelfth Night. Amanda Dunnington English Literature Coursework 5 ...read more.