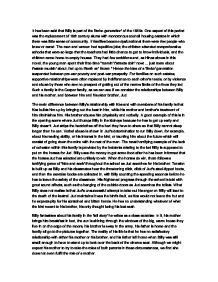 It has been said that Billy is part of the 'limbo generation' of the 1960s.

It has been said that Billy is part of the 'limbo generation' of the 1960s. One aspect of this period was the replacement of 19th century slums with monotonous council housing estates in which there was little sense of community. If families became dysfunctional there were few people who knew or cared. The men and women had repetitive jobs; the children attended comprehensive schools that were so large that the teachers had little chance to get to know individuals, and the children came home to empty houses. They had few ambitions and, as Hines shows in this novel, the young men spent their free time "roamin' t'streets doin' nowt ... just roam about t'estate muckin' about, fed up to t'teeth an' frozen." Hence the idea of a 'limbo' generation suspended between pre-war poverty and post-war prosperity. For families on such estates, supportive relationships were often replaced by indifference to each other's needs, or by violence and abuse by those who saw no prospect of getting out of the narrow limits of the lives they led. Such a family is the Casper family, as we can see if we consider the relationships between Billy and his mother, and between him and his elder brother, Jud. The main difference between Billy's relationship with Kes and with members of his family is that Kes builds him up by bringing out the best in him, while his mother and brother's treatment of him diminishes him. ...read more.

In it, his mother brings him breakfast in bed, the sun is shining through the windows of the big, warm house they live in on the edge of the moors, his brother is away in the army, his father is home and the family all go to the pictures together. The reality of his life is that he has no satisfactory relationship with either his mother or his brother, and his father left home when Billy was still small enough to have to stand up to look over the back of the cinema seat. Although we might expect his mother to try to take the roles of both parents in these circumstances, we find she does not even fulfil the role of a mother. Billy's mother is so wrapped up in her own life that she has no time to pay attention to her fifteen-year-old son. She has obviously had lovers for many years, which is why Billy's father left them. Billy doesn't like his mother acting like this, as is clear when he questions her about Reg, and he gets into a fight at school when MacDowall tells him Jud is not his full brother. His mother treats him with indifference and uses him as a messenger boy who has to do her will. ...read more.

As Jud says, even on the mine "tha's to be able to read and write before they'll set thi on." In contrast to Jud's dismissal of Billy's interest in the bird, Mr Farthing puts into words what is probably Billy's response to watching the bird flying, "That's how I felt, it's as though it was flying in a, ...in a, ...in a pocket of silence, that's it, a pocket of silence." Kes allows Billy to 'escape' for short periods. Billy himself admits, "Do you know, Sir, I feel as though she's doin' me a favour just lettin' me stand here." It is significant that in the closing scenes of the novel Billy, hiding out in the derelict Palace, imagines himself as the big hero, Big Billy, with his hunting bird on his arm. He casts 'Big Kes' off on a wide circuit, ringing up to her pitch until she sees Jud running like a scared rabbit. She hurtles down towards him with a 'breathtaking stoop' which has the 'audience gasping.' These images show clearly how Kes has built Billy up and how, through her, he could have escaped from the limiting deprivations of his life. But Kes does not make contact with her prey. Billy cannot overcome his dependence on his indifferent mother and abusive brother. He returns to the empty house, symbolic of the empty life he will probably now lead ...read more.