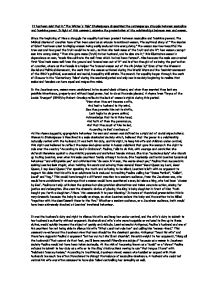 It has been said that in &quot;The Winter's Tale&quot; Shakespeare dramatises the contemporary struggle between masculine and feminine power. In light of this comment, examine the presentation of the relationships between men and women.

It has been said that in "The Winter's Tale" Shakespeare dramatises the contemporary struggle between masculine and feminine power. In light of this comment, examine the presentation of the relationships between men and women. Since the beginning of time a struggle for equality has been present between masculine and feminine powers. The biblical stories of creation have often been used as an excuse to mistreat women. The mythical story of "The Garden of Eden" has been used to display women being easily seduced into wrong doing "The woman saw how beautiful the tree was and how good the fruit would be to eat... so then she took some of the fruit and ate it"; how women corrupt men into wrong doing; "Then she gave some (fruit) to her husband, and he also ate it," this illustrates women's dependence on men, "made him cultivate the soil from which he had been formed". Also because the male was created first "God took some soil from the ground and formed man out of it" and is often thought of as being the perfection of creation, where as the female is a helper "he formed woman out of the rib (Adam's.)" Even after the Women's Social and Political Movement, the work that the women achieved during the World Wars and the feminist movement of the 1960's political, economical and social, inequality still exists. The search for equality began through the work of Chaucer in the "Canterbury Tales" during the medieval period and only now is society beginning to realise that males and females can have equal and respective roles. In the Jacobean era, women were considered to be second-class citizens, and when they married they lost any possible inheritance, property and without legal power, had to do as the male pleased. A rhyme from "Voyce of the Lesde Trumpet" (1549) by Robert Crowley reflects the lack of women's rights during this period; "Now when thou art become a wife, And hast a husband to thy mind, See ...read more.

Hermione is often described as 'peerless' and is an eloquent and exemplary figure; "Let the King's will be done" despite her husbands misuse of power. Leontes abuses his wife, not only through the power of him being the dominant gender in the relationship, but also through his power as the King; wildly accusing her of 'virginalling upon his palm', 'paddling palms', calling her a 'hobby-horse' and describing her as 'slippery.' In Jacobean England a wife's sexual fidelity was the most shameful and emasculating loss of control imaginable, and reflects the cultural fears about what would happen if the structure of marriage was turned upside down. The husband of an adultress was considered a 'cuckold' and often depicted as growing horns out of his head "wear the horns." The mere suggestion that a woman was having sexual relations with another many could greatly damage her reputation. Female honour and social respectability were tied in so closely that death was often preferable to the loss of a woman's chastity. Leontes accuse his wife of adultery without any evidentiary support based upon overhearing a few lines of Hermione and Polixenes conversation "You did continue fault/With any but us" and the fact that she was able to get Polixenes to stay at her husbands request "Tongue-tied, our Queen? Speak you." Leontes' he is able to make these unjustifiable accusations because he is a man, the King and Hermione's husband, and this reduces the public opinion of his wife from a respected and admired "fair Queen" to that of a promiscuous women. Women were considered to tempt men into commit sin, and were polarised as either whores or virgins. The church was a powerful influence in the Jacobean period of the play, and their attitude to women was that it was 'better to marry than burn" (St Paul). The Jacobean audience would have been able to relate to this, because of the treatment of Anne Boyeln by Henry VIII. ...read more.

the male, inferior in the virtues of intelligence, strength, courage and self control yet in "The Winter's Tale" it is men, not women, who lack these virtues. He provides the audience with three females whose opinions and actions are always right and yet they are powerless. Whereas men such as Leontes have power but are constantly wrong. Through the presentation of his characters Shakespeare is illustrating the inequality and oppression of women in the 17th century, thus highlighting the struggle between masculine and feminine powers. Shakespeare's women characters appeal to everyone, "He had a psychological depth that is only in this century beginning to be fully understood" (Schepps). Shakespeare was ahead of his time he " psychologically observed and anticipated a modern understanding of human motivation. Long before Freud existed, Shakespeare understood human nature... Shakespeare's characters, especially when he is writing at the height of his maturity... genuinely reflects the complexity of the human heart. His plays are full of human beings" (Marti Marden). This means that Shakespeare reinvented the stereotypes by creating characters in particular women, who were completely rounded, where as other plays had great characters but they were usually two dimensional or flat. Paulina's outspokenness and nagging criticism of the King for example, are inappropriate for the social expectations of female behaviour at this time but Shakespeare re-defines the word "scold" in his play and shows Paulina's comments to be necessary, heroic and welcome "There is no lady living! So meet for this great errand." She is therefore not the stereotypical scold but a fully drawn character possessing both verisimilitude and individuality. Daly and feminists would argue that this play still holds a valuable message for society today. Shakespeare's carefully crafted female characters of Perdita, Paulina and Hermione are memorable examples of female superiority and virtue being unwisely and unjustly assailed by authouratian males. Shakespeare therefore was for the contemporary struggle in the Jacobean period, that men and women were subjected to every day, and the need for equality of women. ...read more.