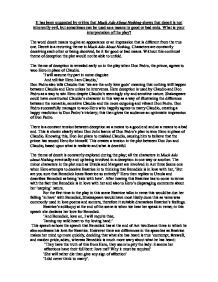 It has been suggested by critics that Much Ado About Nothing shows that deceit is not inherently evil, but sometimes can be us

It has been suggested by critics that Much Ado About Nothing shows that deceit is not inherently evil, but sometimes can be used as a means to good or bad ends. What is your interpretation of the play? The word deceit means to give an appearance or an impression that is different from the true one. Deceit is a recurring theme in Much Ado About Nothing. Characters are constantly deceiving each other or being deceived, be it for good or bad means. Without this continual theme of deception the plot would not be able to unfold. The theme of deception is revealed early on in the play when Don Pedro, the prince, agrees to woo Hero in place of Claudio. 'I will assume thy part in some disguise And tell fair Hero I am Claudio,' Don Pedro also tells Claudio that 'we are the only love gods' meaning that nothing will happen between Claudio and Hero unless he intervenes. Here deception is used by Claudio and Don Pedro as a way to win Hero despite Claudio's seemingly shy and sensitive nature. Shakespeare could have constructed Claudio's character in this way as a way of illustrating the difference between the romantic, sensitive Claudio and the more outgoing and vibrant Don Pedro. Don Pedro successfully manages to woo Hero who happily agrees to marry Claudio, creating a happy resolution to Don Pedro's trickery; this then gives the audience an optimistic impression of Don Pedro. ...read more.

'Is it possible? Sits the wind around that corner?' Once that they are convinced that Benedick has taken the bait, his friends proceed by having fun at his expense, by describing his faults. This creates another similarity between this scene and between act three scene one, the scene in which Beatrice is deceived, Hero lists all Beatrice's faults. After describing all of Benedick's faults in his character, they then pretend to be concerned that he would mock Beatrice mercilessly if he found out her secret. Don Pedro is particularly enthusiastic in his abuse and every time the other characters, Lenoato and Claudio say something in Benedick's defence, the prince, Don Pedro then turns it in to an insult. Once they are convinced that their plan has worked the characters exit from the scene leaving Benedick alone on the stage to mull over what he has just heard. Benedick's soliloquy has a monosyllabic opening: 'This can be no trick' Benedick quickly desicides on whether to believe what he has heard, 'Beatrice's love must be requited' meaning that Beatrice's love needs to be repaid. Benedick decides to believe what he has heard. Although his decision is quick Benedick shows self critical awareness and maturity in his speech: 'I hear how I am censured, they say I will bear myself proudly, if I perceive the Love come of her: they say to that she will rather die than give any sign of affection' This scene is also very similar to the scene in which Beatrice is deceived. ...read more.

He will arrange for Hero to be absent so that the deceit can be successfully carried out. As the deception is occurring in Hero's bedchamber Claudio will assume that it is Hero in there. Also as it is hero's room most of the characters in the plot would be more likely to believe Claudio if hero does not have a solid alibi. This deception could be classed as 'bad' deception as it will destroy the good work that Don Pedro has done to get them together and it will 'poison' there marriage. It will also dishonour Claudio. Honour is a very important in the society that Shakespeare has created. The deception was created out of jealousy and hatred whereas the other deceits where created to get Beatrice and Benedick to realise there love for each other. In conclusion it could be said that the deceit in the plot of Much Ado About Nothing is not inherently evil as the main deceits, the tricking of Beatrice and Benedick to realise there true feelings for each other was necessary for the plot to develop but it was also done out of desperation of the other characters. The only deceit that could be portrayed as evil is Borachio's deception which was created due to the jealousy of Don John for Claudio; this was due to how Claudio was now favoured by his brother, the prince, Don Pedro. ...read more.