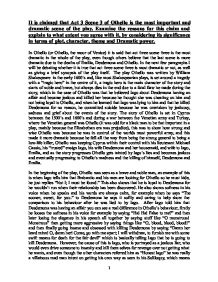 It is claimed that Act 3 Scene 3 of Othello is the most important and dramatic scene of the play. Examine the reasons for this claim and explain to what extent you agree with it, by considering its significance in terms of plot, character, theme and Drama

It is claimed that Act 3 Scene 3 of Othello is the most important and dramatic scene of the play. Examine the reasons for this claim and explain to what extent you agree with it, by considering its significance in terms of plot, character, theme and Dramatic power. In Othello (or Othello, the moor of Venice) it is said that act three scene three is the most dramatic in the whole of the play, even though others believe that the last scene is more dramatic due to the deaths of Emilia, Desdemona and Othello. In the next few paragraphs I will be debating whether it is true that act three scene three is most dramatic or not, as well as giving a brief synopsis of the play itself. The play Othello was written by William Shakespeare in the early 1600's and, like most Shakespearian plays, is set around a tragedy with a "tragic hero" in the centre of it, a tragic hero is the main character of the story and starts of noble and brave, but always dies in the end due to a fatal flaw he made during the story, which in the case of Othello was that he believed Iago about Desdemona having an affair and became jealous and killed her because he thought she was cheating on him and not being loyal to Othello, and when he learned that Iago was lying to him and that he killed Desdemona for no reason, he committed suicide because he was overtaken by jealousy, sadness and grief about the events of the story. The story of Othello is set in Cyprus between the 1500's and 1600's and during a war between the Venetian army and Turkey, where the Venetian general was Othello (it was odd for a black man to be that important in a play, mainly because the Elizabethan era was prejudice), this was to show how strong and wise Othello was because he was in control of the worlds most powerful ...read more.

achieved, and he is also proud of the brave and honourable appearance of his character, so when Iago told Othello of Desdemona's affair it hurt his pride even more than it heightened his hatred and jealousy; so he wanted to appear powerful and moral at every possible time, and when this is was denied to him, he became extremely powerful in his aggression. Finally Love and Jealousy in this scene is very important to the play because these are the two themes that Iago mainly corrupted in Othello, Love is used basically used between Othello and Desdemona because they love each other at the beginning of the scene, and when Othello becomes Jealous (the other theme) of Cassio because he thinks that he had won Desdemona's heart, and that they were in love and having an affair, so that Othello lost his love near the end and gained his jealousy and hatred over her, it is also used because Othello loves Desdemona after Iago old him that he was having an affair so he didn't believe him and told him to get truth, and he couldn't ask her whether she was telling the truth because his love and his pride didn't want to know the truth. These themes in terms of importance give us a high understanding of how tragic the play, especially this scene really is, and also give us a better understanding of Iago's plan to get what he wants, because his plan is loosely based on most of the themes which are in the scene to give us a better understanding, for example he attacks Othello's Pride and Love to make him Jealous by thinking she is Deceptive and Evil, and that Iago is Honest and Innocent. It is easily said that the plot of the scene is the most important impact to how tragic it becomes, and the scene really does it justice to the other catalysts impact on the scenes portrayal to the rest of the play. ...read more.

which makes him feel stupid and upset, "Not to affect many proposed matches" and "the moor" also have this effect because it makes Othello even more upset because he thinks that she might leave him because he is black, which is one of the main turning points of Othello's madness because it attacked his pride and self confidence which turned him into the monster that wanted Desdemona dead. The Dramatic power is probably the most important catalyst in the scene to how dramatic it is as a whole, and I think this because it is mostly visible for this and because that is what it was there to do, also like the handkerchief's effect, the Dramatic power in this scene also affects the rest of the play because if there was too little then w would start to lose interest about the rest of the play, and if there was too much then we would have been overpowered by it, this does show the overall power and intelligence Shakespeare had when he was writing because he managed to keep us in perfect suspense during all of his plays. In conclusion, Act Three Scene Three of Othello was the most dramatic scene of the whole play; it was most dramatic because of many reasons but three most important, firstly because of the portrayal of Othello and his trust for Iago, which slowly and dramatically pushed him past the point of no return because of the loss of self control and confidence that Desdemona would not have an affair because of how his pride was tainted by Iago's lies. Secondly by the way Shakespeare portrayed his arrogance to the fact that Iago was lying to him and the way that Iago was able to get power over him physically and mentally, and lastly because of the overall dramatic power caused by the handkerchief and the accidental actions that the others had to help Iago drive Othello to his doom. By Matthew Lomax ?? ?? ?? ?? 1 ...read more.