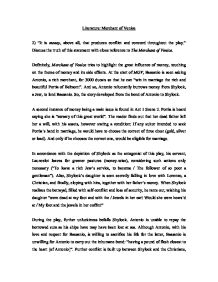 &quot;It is money, above all, that produces conflict and concord throughout the play.&quot; Discuss the truth of this statement with close reference to The Merchant of Venice.

Literature: Merchant of Venice 2) "It is money, above all, that produces conflict and concord throughout the play." Discuss the truth of this statement with close reference to The Merchant of Venice. Definitely, Merchant of Venice tries to highlight the great influence of money, touching on the theme of money and its side effects. At the start of MOV, Bassanio is seen asking Antonio, a rich merchant, for 3000 ducats so that he can "win in marriage the rich and beautiful Portia of Belmont". And so, Antonio reluctantly burrows money from Shylock, a Jew, to lend Bassanio. So, the story developed from the bond of Antonio to Shylock. A second instance of money being a main issue is found in Act 1 Scene 2. ...read more.

When Shylock realizes the betrayal, filled with self-conflict and loss of security, he rants out, wishing his daughter "were dead at my foot and with the / Jewels in her ear! Would she were hears'd at / My foot and the jewels in her coffin!" During the play, further unluckiness befalls Shylock. Antonio is unable to repay the borrowed sum as his ships have may have been lost at sea. Although Antonio, with his love and respect for Bassanio, is willing to sacrifice his life for the latter, Bassanio is unwilling for Antonio to carry out the inhumane bond: "having a pound of flesh closest to the heart [of Antonio]". Further conflict is built up between Shylock and the Christians, as a whole. ...read more.

He is partially relieved and happy with the outcome ("sweet lady, you have given me life and living"), and the relationship between him and Bassanio (together with his wife, Portia), grows. To add to the good news, Antonio is told that three of his ships have come to port full of goods. He has regained his losses, while Shylock, the money-lending merchant, loses all that he has. Ironically, Portia's words on arrival in the court ("Which is the merchant here? And which the Jew?"), emphasize an ambiguity as both men, merchants, equate their assets with "life". MOV's main character, or hero, could be, on second thoughts, either the selfless Antonio, or Shylock, one that invites sympathy in the audience. Surely, it is money, above all, that produces conflict and concord throughout the play. [668 words] -- End -- ...read more.