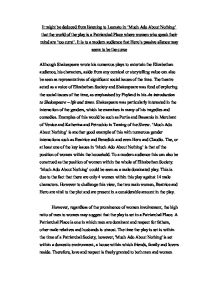 It might be deduced from listening to Leonato in 'Much Ado About Nothing' that the world of the play is a Patriarchal Place where women who speak their mind are 'too curst'. It is to a modern audience that Hero's passive silence may seem to be the curse

It might be deduced from listening to Leonato in 'Much Ado About Nothing' that the world of the play is a Patriarchal Place where women who speak their mind are 'too curst'. It is to a modern audience that Hero's passive silence may seem to be the curse Although Shakespeare wrote his numerous plays to entertain the Elizabethan audience, his characters, aside from any comical or storytelling value can also be seen as representatives of significant social issues of the time. The theatre acted as a voice of Elizabethan Society and Shakespeare was fond of exploring the social issues of the time, as emphasised by Phyland in his An introduction to Shakespeare - life and times. Shakespeare was particularly interested in the interaction of the genders, which he examines in many of his tragedies and comedies. Examples of this would be such as Portia and Bassanio in Merchant of Venice and Katherina and Petruchio in Taming of the Shrew. 'Much Ado About Nothing' is another good example of this with numerous gender interactions such as Beatrice and Benedick and even Hero and Claudio. The, or at least one of the key issues in 'Much Ado About Nothing' is that of the position of women within the household. To a modern audience this can also be construed as the position of women within the whole of Elizabethan Society. ...read more.

That Don Pedro, a valued opinion within the play favours a woman who knows her own mind and also appreciates what they say somewhat strengthens the argument. On the other hand, Hero's 'passive silence' suggests another aspect to the role of women, aside from the feisty Beatrice. But it is debatable whether Hero's silence is out of passivity or an enforced silence. She has been dismissed by many critics as 'passive' and even at times 'in-credible' but it is perhaps more appropriate to regard her as distanced from the well spoken Beatrice due to her modesty, youthful innocence, and romantic picture frame in which she is set. Even modern readers should be able to understand and sympathise with her character as younger and shyer than Beatrice, maybe even overshadowed by her cousin. She may in fact therefore, represent a different kind of character to that of Beatrice but this does not necessarily mean that she is not of her own mind. When Don Pedro asks Hero about the accusations against her and no answer is received, it could be perceived as an example of Hero's passiveness but given closer regard she is in fact interrupted and there is no evidence to speak of to say that given the chance she wouldn't have said exactly what she wanted. And again in defence of Hero, she reacts against Claudio's appalling allegations with a mature attitude of restraint that sympathetic modern audiences should construe as such. ...read more.

The indications of this are the freedom of expression for women, however that is, and the taking at face value of all of the characters for their personalities within the play only. For many modern readers, the level of satisfaction at the end of the play can be seen as debatable, for the strong feminist symbol Beatrice has been seen to submit to a man despite her previous principled opinions and Hero has once again been seen to be passive and weak enough to once more readmit Claudio to her affections. But I think that the result of the play is satisfying. Despite Beatrice's 'flaws' of sharpness and fierce attitude, she fell in love with a man who loves her and accepts her ways, her 'submission' may therefore be more aptly conceived as luck and happiness to come within an understanding and intelligently balanced relationship. Hero has also appropriately taught Claudio a lesson on trust and loyalty but has maturely forgiven him and her 'submission' is also one into a happy marriage, now blessed with the gift of trust owing to their experience. She has also taught Claudio to appreciate her, having momentarily lost her and mutual appreciation is valuable present in both relationships. The important fact that 'Much Ado About Nothing' portrays is the difference between people, how they react and also present themselves and the happy ending is the understanding and acceptance of this and if each women's 'curse' be such then despite the clich� they may all live happily ever after. ...read more.