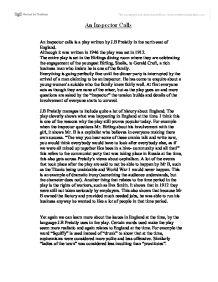 J.B Preistly manages to include quite a lot of history about England. The play cleverly shows what was happening in England at the time. I think this is one of the reasons why the play still proves popular today.

An inspector calls is a play written by J.B Preistly in the north east of England. Although it was written in 1946 the play was set in 1912. The entire play is set in the Birlings dining room where they are celebrating the engagement of the youngest Birling, Sheila, to Gerald Croft, a rich business man who insists he is one of the family. Everything is going perfectly fine until the dinner party is interrupted by the arrival of a man claiming to be an inspector. He has come to enquire about a young women's suicide who the family knew fairly well. At first everyone acts as though they are none of the wiser, but as the play goes on and more questions are asked by the "inspector" the tension builds and details of the involvement of everyone starts to unravel. J.B Preistly manages to include quite a lot of history about England. The play cleverly shows what was happening in England at the time. I think this is one of the reasons why the play still proves popular today. For example when the inspector questions Mr. Birling about his involvement with the girl, it shows Mr. B is a capitalist who believes in everyone making there own success. ...read more.

Besides, you're not the type - you don't get drunk." I think this shows just how much Mrs. B has been closing her eyes to things she doesn't want to believe. Eric Birling is a very heavy drinker. He had a short fling with the girl in question (Eva Smith). He ended up getting Eva pregnant, which he feels both guilt and frustration over. Unlike his parents Eric is aware of his responsibility and he therefore wanted to give her money. Eric is described as "not quite at ease, half-shy, half-assertive." He doesn't have an easy relationship with his father and has also stated he is ashamed of his mother especially. Sheila is the youngest of the Birlings. At the beginning of the play she seems cheerful, but as the play goes on, we start to see that she is not as na�ve as she appears. Similarly like her brother, she feels a lot of guilt about what has happened and because of her jealous actions she blames herself for a lot. Through out the play you can see Sheila becoming more mature and outspoken. This is shown in act 3 when she gets angry with her parents for trying to "pretend nothing much has happened." Going back to the time period of the play, I think the way Sheila matures throughout the play relates the progress of women's rights going on at the time. ...read more.

Finally, the message J.B priestly tried to get across. Like many other plays of his "An inspector calls" involves a strong political message. For example, at the time the play was written, upper and lower class distinctions had been greatly reduced as a result of two world wars. J.B priestly purposely showed strong distinctions between classes to show how important it was for these issues to change. J.B priestly makes the audience aware of the issues with a women's place in society in 1945. He uses Eva Smith to symbolize how women were portrayed as "cheap labour". Throughout the play he gets across his message by slowly making the Birling's realize their mistakes with Eva Smith. These are just 2 of many messages Priestly was aiming to give out with an inspector calls. He deliberately set his play in a time where lots of changes were happening to remind people that even though war was over, people still had to work hard at these changes to enable a more caring, fair society. I think that "An inspector calls" still proves to be a popular play today because it shows many issues that were wrong in Britain at the time. It also reminds us of key moments in history and changes being made for the very first time. ...read more.