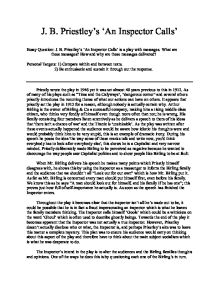 J. B. Priestley's 'An Inspector Calls' Essay Question: J. B. Priestley's 'An Inspector Calls' is a play with messages. What are these messages? How and why are these messages delivered? Personal Targets: 1) Compare within and between texts. 2) Be enthusiastic and sustain it through out the response. Priestly wrote the play in 1946 yet it was set almost 40 years previous to this in 1912. As of many of his plays such as "Time and the Calyways", "dangerous corner" and several others priestly introduces the recurring theme of what our actions can have on others. It appears that priestly set the play in 1912 for a reason, although nobody is actually certain why. Arthur Birling is the owner of Birling & Co a successful company, making him a rising middle class citizen, who thinks very fondly of himself even though more often than not; he is wrong. His family consisting four members listen attentively as he delivers a speech to them of his ideas that 'there isn't a chance of war' and the Titanic is 'unsinkable'. As the play was written after these events actually happened the audience would be aware how idiotic his thoughts were and would probably think him to be very stupid, this is an example of dramatic irony. During his speech he poses the idea 'the way some of these cranks talk and write now, you'd think everybody has to look after everybody else', this shows he is a Capitalist and very narrow minded. ...read more.

Once the line of questioning turns to Gerald, the Inspector is friendlier towards Sheila. The inspector understands that Sheila would want to hear the about Gerald's affair with Eva Smith, or "Daisy Renton" so he ensures she stays by saying, 'If she leaves now she'll think she's entirely to blame'. As Gerald is being questioned, Sheila seems to step into the role of the inspector, which she also does at the end of the end of the play after he leaves; this shows how alike her and his views are. The inspector doesn't treat Gerald with fondness or contempt. He acknowledges that 'he at least had some affection for her and made her happy for a time.' By quizzing Gerald about his affair he makes it clear to the audience that everyone should thing about there actions, as all actions have consequences. This is one message that priestly wants the audience to consider. Up until this point Mrs. Birling has not been present at one of the inspector's questionings, so she is unaware of the inspector's abruptness. She describes him as 'a trifle impertinent'. Like Arthur Birling, she seems to be apparent to receiving nothing but respect. This is because she is of a high-middle class. The Inspector correctly treats the characters with the same disregard as they gave Eva Smith. Mrs. Birling becomes increasingly annoyed at how the Inspector treats her. ...read more.

I also believe that the Priestly used the idea of war to put across his theory was because it was a major issue at that time, and people were still suffering the consequences of it. Priestly also seems to be asking "What kind of society are we fighting to save?" The final scene of the play is one of which the Birling's receive a telephone call from the police stating 'a girl has just died.... after swallowing some disinfectant' and a real inspector would be arriving shortly to investigate them. This is an unexpected twist. The impostor inspector was there to punish them on a moral level which he managed to succeed in doing with two of the party, Eric and Sheila yet not with the others. As Mr. and Mrs. Birling and Gerald were all afraid of a public scandal no doubt that is what the real inspector will provide although as the story has ended we will not find out. I believed that without the twist at the end the play would not have the same effect as Mr. and Mrs. Birling and Gerald would have avoided punishment. The inspector's role in the play is to teach and provide a channel for Priestly to present his own messages, in respect to the story he did this by informing the Birling household what they had caused a girl to do due to their actions. In regards of the whole society, he did this by voicing Priestley's opinions that we cannot live together peacefully if we do not work together. ?? ?? ?? ?? ...read more.