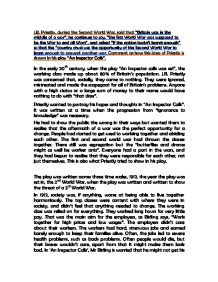 J.B. Priestly, during the Second World War, said that "Britain was in the middle of a war", he continues to say, "the first World War was supposed to be the War to end all Wars", and asked "If the nation hadn't learnt enough" so that the "country must use the opportunity of the Second World War to learn enough to prevent another war. Comment on how this idea of Priestly is shown in his play "An Inspector Calls". In the early 20th century, when the play "An Inspector calls was set", the working class made up about 80% of Britain's population. J.B. Priestly was concerned that, socially, they came to nothing. They were ignored, mistreated and made the scapegoat for all of Britain's problems. Anyone with a high status or a large sum of money to their name would have nothing to do with "that class". Priestly wanted to portray his hopes and thoughts in "An Inspector Calls". It was written at a time when the progression from "ignorance to knowledge" was necessary. He had to show the public the wrong in their ways but wanted them to realise that the aftermath of a war was the perfect opportunity for a change. People had started to get used to working together and abiding each other. The first and second world war had thrown the classes together. There still was segregation but the "butterflies and drones might as well be worker ants". Everyone had a part in the wars, and they had begun to realise that they were responsible for each other, not just themselves. This is also what Priestly tried to show in his play. ...read more.

Mr Birling is forced to go down on to the street to be questioned. He is the first to be questioned. He tries to distract the Inspector, by offering him a drink and tries to pass him off and make it sound like he could do no wrong by saying that he used to be an Alderman and was Lord Mayor two years ago. He asks if there is a problem with the warrant, he knows nothing about Eva's death, and becomes impatient (which perhaps shows his true nature) when Goole doesn't tell him what is wrong. When Goole does tell him that a girl committed suicide, and how she committed suicide, he becomes even more impatient and says that it's a "horrid business" and that he doesn't understand how it affects him. Goole tells Mr Birling that the girls name was Eva, he recalls her name but doesn't know where from. This shows perhaps that she wasn't worth remembering. When Birling is told that Eva used to work for him, he vaguely says "Oh that's it is it? Well we've several hundred young women there and they keep changing", this implies that he has fired a lot of people and doesn't care. He is shown a photo of Eva and immediately recognizes her. He admits to her being an employee and that he discharged her two years ago, in 1910, this makes sure that the audience know the era in which the play was set. Goole asks Gerald to stay, which surprises both Gerald and Birling so Birling says that there was nothing mysterious or scandalous as far as he's concerned as it happened two years ago, he said that he had nothing to do with the "wretched girl's" death. ...read more.

The inspector concludes it by going over each of their stories and emphasizing their faults. Birling offers money but not a change of treatment to Eva Smith if she was alive. The Inspector retorts it by saying that the one Eva Smith is gone but "there are thousands of Eva Smiths and John Smiths still left, their lives, hopes, fears, suffering and chance of happiness all intertwined in our lives and what we think, say and do. We don't live alone. We are members of one body. We are responsible for each other. And I tell you that the time will come soon when if men will not learn their lesson, then they will be taught it in fire, blood and anguish". In the theatre production, the house falls apart, as though it had been bombed, to represent fire, blood and anguish. These reflect Priestly's own thoughts and it is an appeal to the audience to change their ways for the good or they will be taught it in fire, blood and anguish, or in other words, the war. The Inspector may represent Priestly or the War. He has Priestly's views and hopes. He has the same compassion for equality. But he also may represent the war because he destroyed the Birling family so that they could never return to their old ways. Maybe it was the Inspector leaving that caused the house to fall apart. He wants to get his message through to the world so that the social structure changes. He shows this in the writing, in the stage directions and by implication. This is an effective method of getting an idea across, because the best way to point out a fault is to show it face to face and show the solution. This was J.B Priestly's aim and he accomplished it successfully. ...read more.