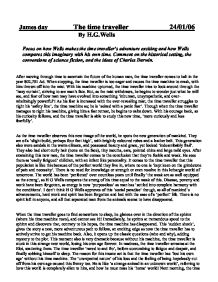 James day The time traveller 24/01/06 By H.G.Wells Focus on how Wells makes the time traveller's adventure exciting and how Wells compares this imaginary with his own time. Comment on the historical setting, the conventions of science fiction, and the ideas of Charles Darwin. After moving through time to ascertain the future of the human race, the time traveller comes to halt in the year 802,701 Ad. When stopping, the time traveller is too eager and causes the time machine to crash, with him thrown off into the mist. With his machine upturned, the time traveller tries to look around through the 'hazy curtain', striving to see man's fate. But, as the mist withdraws, he begins to wonder just what he will see, and fear of how man may have evolved into something 'inhuman, unsympathetic, and over- whelmingly powerful'! As his fear is increased with the ever-revealing mist, the time traveller struggles to right his 'safety line', the time machine as; he is 'seized with a panic fear'. Though when the time traveller manages to right his machine, giving him a fast retreat, he begins to calm down. With his courage back, so his curiosity follows, and the time traveller is able to study this new time, 'more curiously and less fearfully'. As the time traveller observes this new image of the world, he spots the new generation of mankind. They are of a 'slight build, perhaps four feet high', with brightly coloured robes and a leather belt. This generation also wore sandals in the warm climate, and possessed beauty and grace, yet looked 'indescribably frail'. ...read more.

Also, because Charles Darwin was quite famous for his ideas on natural selection at the time, he would have been a big influence for H.G.Wells. In addition, as evolution takes place over thousands of years, it would be perfect for the science fiction genre, as going into the future (a few thousand years, though) would give sufficient time for evolution to have a visible effect . diverge in species could be a warning from H.G.Wells, showing how different people may grow so far apart as to conquer over each other, instead of working in cooperation to better mankind. How mankind may have lost sight of its moral values for the difference in itself, between wealth and poverty, race and power. It's necessary for the time traveller to venture down into the underground dwelling of the subterranean species (morlocks) because he feels 'assured' that this is where his time machine has been taken. In addition, it adds suspense to a rather dull first part of the book, enticing the reader through the sheer thrill of the 'unknown' danger. When down in the underground lair of the Morlocks, the time traveller notices a 'red joint' of a 'large animal, which is a key moment in the book. This is because it establishes that the morlocks are carnivorous. More importantly though, the audience will have already realised that the joint comes from the Eloi, as there are no signs of sick or dying Eloi, or any such place as where the body's are disposed off. This gives the audience a chance to get ahead of the time traveller, and visualize their own idea of further into the story. ...read more.

H.G.Wells makes the time travellers escape from the Morlocks exciting by, making him over-confident, only to find himself in trouble when he fails to remember something vital to his plan. It's this panic as the time traveller finds himself at the mercy of the Morlocks, dashing his previous sense of security and calm, which is exciting. The time traveller is confident of how to escape, as he has for once understood what the Morlocks plan to do, lure him with his time machine and trap him in the dark! He's too confident because he's so close to escaping and has become convinced that he can outsmart the Morlocks, almost like someone who thinks they're invincible. The escape is made suspenseful by the fact that the time traveller is very brash, and doesn't think to check the aspects of his plan, especially the most important part- light! Transfixed by how close he is to being able to go home, and euphoria from the fact that he's survived and beaten the Morlocks, he just walks through the pedestal door, up to his machine. This makes way for the last sudden terror, as his plan for an easy escape dissipates, finding that the matches he has left are 'of the abominable kind' that only light on the box. Instantly his calm and ego vanish as he fights for the last time against the Morlocks. It's suspenseful because of the instant change from pure calm and relief, to adrenalin as he acts spontaneously to hastily gain control of his machine and escape back into his journeying through time. Also, the dawning realisation of the desperation of his situation gets the audience on the edge of their seat, truly a classic move. <<< ...read more.