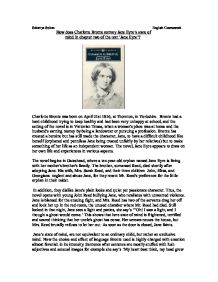 Sekariya Sultan English Coursework How does Charlotte Bronte convey Jane Eyre's state of mind in chapter two of the text 'Jane Eyre'? Charlotte Bronte was born on April 21st 1816, at Thornton, in Yorkshire. Bronte had a hard childhood trying to keep healthy and had been very unhappy at school, and the setting of the novel is in Victorian Times, when a woman's place was at home and the husband's earning money by being a landowner or pursuing a profession. Bronte has created a heroine but has still made the character, Jane, to have a difficult childhood like herself (orphaned and penniless Jane being treated unfairly by her relatives) but to make something of her life as an independent woman. The novel, Jane Eyre appears to draw on her own life and experiences in various aspects. The novel begins in Gateshead, where a ten-year-old orphan named Jane Eyre is living with her mother's brother's family. ...read more.

But the novel fits very well with the headstrong, emotional character 'Jane Eyre'. It would have been hard to believe that Jane was a 'passionate' person if Bronte wrote the story in cool, elegant language. The language that's she's chosen is emotionally powerful. Jane Eyre is the story of one young girl, told in her own voice, the plot of Jane Eyre is very complicated, and suspense plays a large role in the story, like she gets punished for the crime of not being cheerful enough and suddenly becoming furious after always being too afraid of John and not stand up to him. Jane Eyre is a first-person narrative, it's the "I" of the story the person whose voice we hear as we read, and everything that happens is seen from her point of view. Bronte uses a lot of different techniques in chapter 2 to convey Jane's feelings. She uses punctuation to show commandments, anger and questioning to show Jane's tone of voice for example; "Master! ...read more.

Her feelings and emotions change throughout the chapter and we are told this through Charlotte Bronte's use of repetition which is one of the main techniques used by the author also in the second chapter the author uses colours to reflect on how Jane is feeling at that moment in the red room. The author gives a detailed description of the red room through the use of imagery. For example "Curtains of deep red damask". Bronte doesn't just describe the curtains as red; she goes into depth by using the word "deep" and "damask". These are very deep harsh colours as red is usually used to express anger or violence. Jane feels different as to the way she is treated for they resent Mr. Reed's preference for the little orphan in their midst, in addition, they dislike Jane's plain looks and quiet yet passionate character. Finally I conclude that throughout chapter two Jane Eyre's state of mind is in a state of confusion, fury and anger as to why she is locked in the Red room, which also conveys her feelings and state of mind . ...read more.