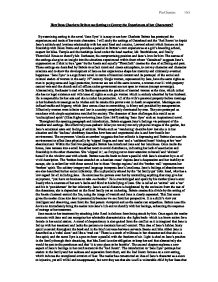 How Does Charlotte Br�nte use Setting to Convey the Experiences of her Characters? By examining setting in the novel 'Jane Eyre' it is easy to see how Charlotte Br�nte has portrayed the experiences and traits of her main characters. I will study the settings of Gateshead and the 'Red Room' to depict Jane's solitude and loveless relationship with her aunt Reed and cousins, Lowood school which focuses on her friendship with Helen Burns and provides a parallel to Br�nte's own experiences at a girl's boarding school, respect for Miss. Temple and the hardships faced under the head teacher, Mr. Brocklehurst, and finally Thornfield House to identify Mr. Rochester, his compromising position and Jane's love for him. The names of the settings also give an insight into the situations experienced within them where 'Gateshead' suggests Jane's suppression as if shut in by a 'gate' by the Reeds and equally 'Thornfield' creates the idea of suffering and pain. These settings are described by Br�nte to reflect mood and create atmosphere, to convey character and character relations and to show the development of Jane as her experiences shape her maturity and ultimately eventual happiness. 'Jane Eyre' is a significant novel in terms of historical context and its portrayal of the social and cultural station of women in the early 19th century. Single women, represented by Jane, have the same rights as men in paying taxes and legal protection, however are not of the same income, a woman over 21 with property cannot vote and the church and all offices under government are not open to women (except sovereign). Alternatively, Rochester's mad wife Bertha represents the position of married women at the time, which is that she has no legal existence and wife loses all rights as a single woman which is entirely absorbed by her husband. He is responsible for her acts and she is under his protection. ...read more.

What is God?' and this hardens her character considerably. In the setting of Lowood School it is the physical setting that shapes Jane's bleak outlook on life, leaving her once again in solitary dejection. This experience makes Jane's character more reserved as a consequence as she is afraid that if she dedicates her heart to a person again it will never be secure and thus she will be vulnerable. This aspect of her persona is recognised by Rochester later in the novel and this recognition is what gradually leads Jane to reaccept love into her life. Lowood School draws a parallel to Br�nte's own school years which she attended with her two eldest sisters, the 'Casterton School,' after their mother died which was also a charity school but for daughters of poor clergy where the girl were fed, clothed and taught to go out and be governesses when they left. Lowood was based on Casterton, which was run by a Mr. Carus Wilson upon whom Mr.Brocklehurst is based. Wilson believed that children should be punished to save their souls since the Old Testament teachings of original sin preached that they were born evil. When 'Jane Eyre' was published, Lowood was instantly recognised as Casterton School and a Miss. Beale went to be a Head Mistress of Casterton and left after a short time saying the place was 'scurrilous' and exactly as described. Br�nte greatly admired her teachers in Brussels, similarly portrayed in Jane's love and respect for Miss.Temple, and Br�nte lost her two eldest sisters due to illness from Casterton in a similar way to which Jane lost her best friend Helen Burns to typhoid. This section of her life shaped Br�nte just as much as it did Jane, and she resolved to complete her studies and become a governess. This was a sensible procedure to provide herself a self-supportable income, proving how Jane has developed into a practical and sensible young woman through her experiences. ...read more.

This is a stark omen and hints again at religious context that God is angry for this moral disobedience. This scene is a warning to Jane of the ignorance of what she has got herself into, and the reader perceives this sign and thus creates dramatic tension for the unfolding plot ahead. However the sides of the tree are 'not broken from each other for the firm base and strong roots kept them unsundered below,' indicating that the experiences ahead will break them apart, but their deep-rooted love for one and other will remain, and will eventually keep them together as the tree is. It as though nature is mirroring what is to come for Jane and Rochester, for as the novel unfolds, the existence of Bertha is revealed and Jane is thus betrayed by Rochester and flees Thornfield. She pursues a different life before returning to Rochester who has suffered the loss of Bertha and Thornfield in a great fire, leaving him blind. Jane and Rochester are reunited and she assures Rochester that he is full off vitality and 'strength' still, however it is she that saves him eventually by becoming his 'safe prop' and assuming the role of heroine to save the man, again controversial to typical Victorian beliefs. It has been Jane's journey to assume this role of independent woman and achieving the love of Rochester that is reflected through the changing settings from the strict suppression of Gateshead and Lowood which uses setting to play on Jane's childish vulnerability and inferiority, to the romantic and equally catastrophic roller coaster sequence staged at Thornfield though the attraction of Rochester, the emphasis provided by Bertha and descriptions used to create dramatic tensions that led to her ultimate love of Rochester and eventual happiness. The changing settings and experiences used by Br�nte take the reader through each stage of Jane's life focusing on each influencing aspect and allow the reader to emphasise with the developments they induce in her character as she becomes a well moulded woman to aspire towards. ...read more.