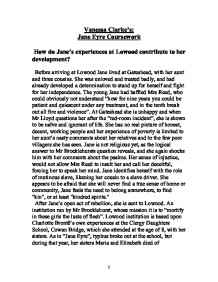 Jane Eyre Coursework - How do Jane's experiences at Lowood contribute to her development?

Vanessa Clarke's: Jane Eyre Coursework How do Jane's experiences at Lowood contribute to her development? Before arriving at Lowood Jane lived at Gateshead, with her aunt and three cousins. She was unloved and treated badly, and had already developed a determination to stand up for herself and fight for her independence. The young Jane had baffled Mrs Reed, who could obviously not understand "how for nine years you could be patient and quiescent under any treatment, and in the tenth break out all fire and violence". At Gateshead she is unhappy and when Mr Lloyd questions her after the "red-room incident", she is shown to be na�ve and ignorant of life. She has no real picture of honest, decent, working people and her experience of poverty is limited to her aunt's nasty comments about her relatives and to the few poor villagers she has seen. Jane is not religious yet, as the logical answer to Mr Brocklehursts question reveals, and she again shocks him with her comments about the psalms. Her sense of injustice, would not allow Mrs Reed to insult her and call her deceitful, forcing her to speak her mind. Jane identifies herself with the role of mutinous slave, likening her cousin to a slave driver. She appears to be afraid that she will never find a true sense of home or community, Jane feels the need to belong somewhere, to find "kin", or at least "kindred spirits." ...read more.

Helen patiently puts up with Jane's questions, until the last one "Are you happy here?" She avoids the answer, saying she would like to read. Like Jane, Helen is an orphan who longs for a home, but Helen believes that she will find this home in Heaven rather than Northern England. And while Helen is not oblivious to the injustices the girls suffer at Lowood, she believes that justice will be found in God's ultimate judgment-God will reward the good and punish the evil. Jane, on the other hand, is unable have such blind faith. Her quest is for love and happiness in this world. At one point Helen, dismissed in disgrace, is sent to stand in the middle of the room. When in the middle of the room, she "neither wept nor blushed", surprising Jane, who is sure that she herself would "wish the earth to open and swallow" her. She is convinced that she would react differently, but when the time comes, she reacts in the same way, led by Helen's example and under her influence. There is a great contrast between Helen and Jane; Helen's attitude to punishment contradicts everything that Jane believes in. Jane's views are based upon her instinctive reaction to injustice, whilst Helen's is on careful consideration of things. ...read more.

When Diana and Mary take her into their house she feels welcome and as though she belongs. Something she has longed for, for a long time. After her degradation to beggar, she pulls herself back up and does not appear downstairs until she is spotless again. Her pride reappears and she delights as never before with the company of intelligent charming associates, who are her equal in every way. At problematic times, Jane now turns to God. When she flees Thornfield, her "remembrance of God" is the same as when she acknowledges to herself her love for Rochester, where she says that Rochester has become so important in her life that he even displaces religion and stands between her and God. Jane also has the power of forgiveness in her. She is ready to forgive Mrs Reed for her wrongs and she returns to Thornfield to find and forgive Rochester. It is possible for her learnings from Lowood to be forgotten or ignored in a trice. She stoops low to begging when she leaves Rochester and when she lets St. John take over her feelings, but regains them at both times, refusing his proposal of marriage and being taken in by the Rivers. Lowood made Jane a capable woman with morals, who knew her place. It was all that she needed to have back in the 19th century when at the time the book was written, women were considered inferior to men. 1 ...read more.