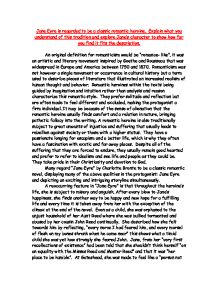 Jane Eyre is regarded to be a classic romantic heroine. Explain what you understand of this tradition and explore Jane's character to show how far you find it fits the description.

Jane Eyre is regarded to be a classic romantic heroine. Explain what you understand of this tradition and explore Jane's character to show how far you find it fits the description. An original definition for romanticism would be "romance- like", it was an artistic and literary movement inspired by Goethe and Rousseau that was widespread in Europe and America between 1750 and 1870. Romanticism was not however a single movement or occurrence in cultural history but a term used to describe pieces of literature that illustrated an increased realism of human thought and behavior. Romantic heroines within the texts being guided by imagination and intuition rather than analysis and reason characterize this romantic style. They prefer solitude and reflection but are often made to feel different and excluded, making the protagonist a firm individual. It may be because of the sense of alienation that the romantic heroine usually finds comfort and a relation in nature, bringing pathetic fallacy into the writing. A romantic heroine is also traditionally subject to great amounts of injustice and suffering that usually leads to rebellion against society or those with a higher status. They have a passionate longing for escapism and a better life, which is why they often have a fascination with exotic and far away places. Despite all of the suffering that they are forced to endure, they usually remain good hearted and prefer to refer to idealism and see life and people as they could be. ...read more.

By comparing her love to the dead first born in the tenth plague, Jane places that love within an existing spiritual context. She feels that she is being punished for not obeying her religion or instincts and she also realizes that she is guilty of the sin of the Egyptians - of believing that Gods powers are limited and that they could evade his law. Bronte seemed to write the novel making it a fact throughout that God does exist. Mainly in the childhood period of Jane's life when she is treated so unfairly by her Aunt Reed, Jane has the quality of childhood imagination on her side to help her cope with the vast amount of dejection she had to tolerate. It is very clear to the reader in the first few chapters of the novel how much Jane longs to escape to lead a better and more fulfilling life and how she relies on books and her imagination in order to believe that this could come true. After her ordeal in the "red room", Bessie offers to fetch a book for Jane, Jane says, "the word book acted as a transient stimulus" this reflects Jane's passion for reading and how she used it as a form of escapism. She chooses "Gulliver's Travels" in which she delights at the adventures that Gulliver encounters and imagines herself within them, she says "I doubted not that I might one day, by ...read more.

Upon the realization that Rochester is already married, Jane flees and is most prominently lead by the moon, it is referred to several times and a human form representing the moon speak to her soul telling her to flee. At the end of the novel, the moon myth is retold with Jane, the feminine character being the provider. She has returned a wealthy woman and tells Rochester, "If you wont let me live with you, I can build a house of my own close up to your door, and you may come and sit in my parlour when you want company of an evening." - Jane is in control of where she lives, not Rochester. In Rochester's interpretation, he told Adele that he would feed Jane with manna; again the roles are reversed when Jane brings him supper. Rochester had said that he would carry Jane to the volcano if she got cold; Jane pauses in conversation to "make a better fire and have the hearth swept up". Because of his disability, he is reliant on Jane, not the other way around. Rochester can no longer refuse to recognize Jane's independence. In conclusion, I would say that Jane Eyre has all of the qualities associated with a romantic heroine. She has a strong sense of duty and religion, she endured a great amount of suffering, therefore enjoyed imagination and fairy stories as a way to escape, she was independent and had a strong link with nature. She is, in my opinion, "A typical romantic heroine." ...read more.