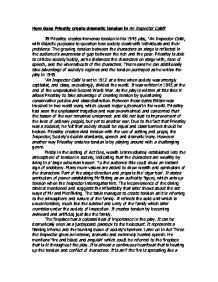 How does Priestly create dramatic tension in An Inspector Calls? JB Priestley creates immense tension in his 1945 play, 'An Inspector Calls', with didactic purposes to question how society deals with individuals and their problems. The growing tension between the characters on stage is reflected in the audience's awareness of gap between the rich and the poor. Priestley is able to criticize society boldly, as he distances the characters on stage with, tone of speech, and the whereabouts of the characters. This means he can additionally take advantage of society's regimes and the tension portrayed as he writes the play in 1945. 'An Inspector Calls' is set in 1912 at a time when society was strongly capitalist, and class, exceedingly, divided the world. It was written in 1945 at the end of the unspeakable Second World War. As the play is written at this time it allows Priestley to take advantage of creating tension by questioning conservative policies and class distinction. Between these dates Britain was involved in two world wars, which caused major upheaval in the world. Priestley had seen the unpleasant tragedies and was overwhelmed and concerned that the lesson of the war remained unlearned: and did not lead to improvement of the lives of ordinary people, but yet to another war. Due to the fact that Priestley was a socialist, he felt that society should be equal and class barriers should be broken. ...read more.

'He speaks carefully, weightily, and has a disconcerting habit of looking hard at the person he addresses before actually speaking'. Here the inspector continues to keep giving a harsh force on each individual especially when tension is created between the Inspector and Birling. When speaking to Birling, Birling begins to feel manipulated as he starts to use hyphens when speaking, and not acting so abrupt. However Birling is very observant and weary of the Inspector and as soon as he finds a error he immediately becomes stuck up. For example Birling realises that the Inspector is 'new' and takes advantage and becomes arrogant.The Inspector has a defined way of asking people questions, it is very calmly said but in an aggressive mode. He is able to bring justification into his etiquette act. Throughout the play many terms are referred to society's double standards. In the Edwardian Era sex before marriage was frowned upon and was not traditional, in this case Gerald was playing in between two women. It was acceptable for Gerald to have a relationship with Sheila as they were being truthful and loving to each other and are of the same class and social hierarchy. However when Gerald began seeing his mistress 'Daisy Renton' (also known as Eva Smith) it was not acceptable to have a full, sexual relationship as she is of a lower standard in society. ...read more.

He also pronounces to Shelia and Gerald that 'when you marry you'll be marrying at a very good time'. Once more he has juxtaposed himself as the time that Shelia and Gerald were going to marry is not good because it would have been the time of war. Furthermore Birling describes the German officers talk as 'silly pessimistic talk' when in actual fact it is not silly talk but truth and reality, which people should have taken into consideration and taken responsibility. So finally to conclude Priestley is able to create dramatic tension throughout Act One and the rest of the playwright with the use of props, speech and society. Priestly deliberately sets in another time but very critical of the modern society he wants to criticize. He wants to put across his views that people need to create a society, which concerns and feels responsible for each other. Priestley implies to the audience that they are all sinners as Priestley is using biblical ideas and illusions, so that a microcosm of Goole becoming a Preacher man. Priestley desired to educate people and warn them and communicate with the populous through the popular medium of the theater. But Priestley boldly manages to intensify his longed emotions for a socialist country which makes the play so tense that he cliff hangers the end making the audience wonder that the Apocalypse is the revelation at the end of the world where we will be judged for who we are and what we do. By Emily Jemal ...read more.