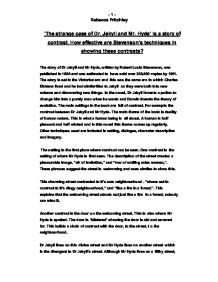 'The strange case of Dr. Jekyll and Mr. Hyde' is a story of contrast. How effective are Stevenson's techniques in showing these contrasts? The story of Dr Jekyll and Mr Hyde, written by Robert Louis Stevenson, was published in 1886 and was estimated to have sold over 250,000 copies by 1901. The story is set in the Victorian era and this was the same era in which Charles Dickens lived and he had similarities to Jekyll as they were both into new science and discovering new things. In the novel, Dr Jekyll invents a potion to change him into a purely man when he wants and Darwin invents the theory of evolution. The main settings in the book are full of contrast. For example the contrast between Dr Jekyll and Mr Hyde. The main theme of the book is duality of human nature. This is what a human being is all about. A human is half pleasant and half wicked and in this novel this theme comes up regularly. ...read more.

The most obvious contrast between Dr Jekyll and Mr Hyde is their physical appearance. Mr Hyde is described as "something displeasing," and "down right detestable," and "feel of deformity,". These descriptions don't say Mr Hyde is deformed but they do say he is simply hideous and horrifying. Towards the end of the novel, Stevenson uses Dr Jekyll to retell the story but adds explanations to what had confused us earlier in the novel. He explains the reason for Mr Hyde's displeasing appearance: "Evil was written broadly and plainly on the face". Dr Jekyll is saying that Mr Hyde is pure evil, which no human is, and this makes his appearance displeasing; he has no decent side. This links to the theme duality of human nature with the two sides to a human of good and evil. Dr Jekyll on the other hand is very unlike Mr Hyde in almost every way. ...read more.

Mr Hyde has no regard for other people's pain and suffering just like Jack the Ripper, and the chapter where he tramples over the little girl "like a damned jaugernaut," shows this. This little section creates an image of an evil man with his face lit with anger as he pushes the girl over as if he is a bull and she is the bull fighter thrusting her red cape around. Contrast is extremely important in this novel because the them is duality of human nature, which is to do with to contrasting sides, and with no contrasts this theme would not fit. I think the technique of leaving the reader with questions throughout the novel and then answering them towards the end, and the retelling of the story in a different person was also an excellent technique that worked well in the novel. I think these are excellent techniques because it keeps the reader wanting to read on to find out the answers to the questions they had in their head. - 1 - Rebecca Fritchley ...read more.

This essay response is for a question that asks about the contrasting thematic elements of Robert Louis Stevenson's 'The Strange Case of Dr. Jekyll & Mr. Hyde'. The answer is reasonably focused, though more time should be spent on identifying ...

This essay response is for a question that asks about the contrasting thematic elements of Robert Louis Stevenson's 'The Strange Case of Dr. Jekyll & Mr. Hyde'. The answer is reasonably focused, though more time should be spent on identifying similar aspects of analysis (such as the symbolic aspect of setting) and consolidating them into more cohesive paragraphs. As it is, this answer is a high D, but with a little readjustment to the presentation of the analytical points, this answer to easily achieve a very solid C grade for GCSE. The candidate needs to identify the bigger picture and work their way down to the details in their analysis, and focus more on how the details influence the reader.

The Level of Analysis here is very superficial, and some of the comment barely merit the term analysis because the candidate has either repeated exactly what Stevenson has written or simply not gone far enough into the literary devices to consider the effect on the reader. A good attempt is made, but at the critical moment the candidate doesn't appear to make any effective commentary, e.g. - "Ã¢â‚¬Å“like a fire in a forest,Ã¢â‚¬Â. This explains that the welcoming street stands out just like a fire in a forest; nobody can miss it." This comment earns no marks at all, as the candidate does not comment on the important part of the analysis, which is to identify the effect on the reader and suggest what impressions this street gives us. The real marks here are in how Stevenson contrasts the spectroscopic nature of the street in question in comparison to it's "dingy neighbourhood" surroundings. This would be commenting on the contrast directly, rather than feature-spotting "similes" and "metaphors".
Where this candidate does earn a fair few marks is in their contextual appreciation. Though not apparent nor explicit, this candidate does appreciate the social attitudes at the time the novel was written, explaining how the older, more refined Dr. Jekyll is more 'socially acceptable' than the ugly, nigh-on deformed Mr. Hyde who, at the time, would've been considered an ugly man on the inside as well as the outside, due to common beliefs that bad people were ugly. This sort of analysis and awareness is very important in analytical essays, as it helps the candidate understand how the authorial intentions originally aimed to shape the book; they are particularly important in this novella, which requires much sensitive awareness of the social and historical factors that influenced the writing of it, seeing that it, quite unanimously by those that have read it, has aged very badly.

The Quality of Written Communication here is below average. There are moments in this essay where the syntactic structure of certain sentences completely compromises their meaning and therefore there validity in the answer. To take examples from the first paragraph alone: "The story is set in the Victorian era and this was the same era in which Charles Dickens lived and he had similarities to Jekyll as they were both into new science and discovering new things. In the novel, Dr Jekyll invents a potion to change him into a purely man when he wants and Darwin invents the theory of evolution. (sic)" - this section barely makes any sense, and requires a mass overhaul of the grammar and punctuation. The candidate also fails to structure simple sentences: "The main settings in the book are full of contrast. For example the contrast between Dr Jekyll and Mr Hyde." This full stop separating these two clauses should be a comma, as the latter clause is only subordinate and, if read alone without the cohesion provided from the first sentence, does not make any sense.