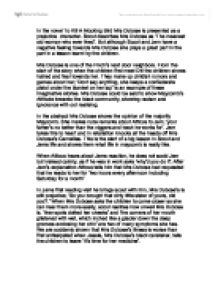 In the novel To Kill A Mocking Bird Mrs Dubose is presented as a prejudice character. Scout describes Mrs Dubose as 'The meanest old woman who ever lived'. But although Scout and Jem have a negative feeling towards Mrs Dubose she plays a great part in the part in a lesson learnt by the children. Mrs Dubose is one of the Finch's next door neighbors. From the start of the story when the children first meet Dill the children shows hatred and fear towards her. They make up childish rumors and games about her; 'Dont say anything, she keeps a confederate pistol under the blanket on her lap' is an example of these imaginative stories. ...read more.

This is the start of a big lesson in Scout and Jems life and shows them what life in maycomb is really like. When Atticus hears about Jems reaction, he does not scold Jem but instead calmly, as if he was in work asks 'why'd you do it'. After Jem's explanation Atticus tells him that Mrs Dubose had requested that he reads to her for 'two hours every afternoon including Saturday for a month' In Jems first reading visit he brings scout with him, Mrs Dubose's is still prejudice; 'So you brought that dirty little sister of yours, did you?.' When Mrs Dubose asks the children to come closer so she can hear them more easily, scout realizes how unwell Mrs Dubose is. ...read more.

They realise Mrs Dubose's condition is severe and that she cant help some of her actions. Atticus the childrens father plays an important role in this, he explains unpleasant terms Mrs Dubose uses to describe people. An example of this is when Scout innocently asks him 'what exactly is a nigger-lover', and Atticus gives a tactful; 'a common, ugly term to label somebody'. This shows Atticus respects his children's age and ability to understand their surrounding. A month after Jem's reading to Mrs Dubose, Atticus came home with news of her death. Atticus explains to the children how 'Mrs Dubose was a morphine addict'. It becomes clear to both Scout and Jem that Mrs Dubose did not know what she was doing, and that she did not realise her actions towards Atticus were as offensive as were. ...read more.