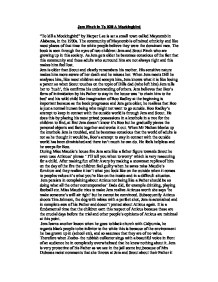 Jem Finch in To Kill A Mockingbird

Jem Finch in To Kill A Mockingbird "To kill a Mockingbird" by Harper Lee is set a small town called Maycomb in Alabama, in the 1930s. The community of Maycomb is of mixed ethnicity and like most places of that time the white people believe they were the dominant race. The book is seen through the eyes of two children: Jem and Scout Finch who are growing up in this society. As Jem gets older he becomes conscious of the fact that this community and these adults who surround him are not always right and this makes him feel lost. Jem is older than Scout and clearly remembers his mother. His sensitive nature makes him more aware of her death and he misses her. When Jem meets Dill he analyses him, like most children and accepts him, Jem knows what it is like losing a parent so when Scout touches on the topic of Dills dad (who left him) Jem tells her to 'hush', this confirms his understanding of others. Jem believes that Boo's form of intimidation by his Father to stay in the house was 'to chain him to the bed' and his wild child like imagination of Boo Radley at the beginning is ...read more.

It is a fundamental time that the children earn this respect of Atticus because these are the crucial days before the trial and other people's opinions of Atticus are minimal at this point. Jem learns another lesson when he goes to black church with Calpurnia, he regards black people to be inferior to the white this is because of the environment he has grown up in (school etc), and so assumes that they are of no value. Therefore when Zeebo- the rubbish collector sings with a beautiful voice in front of an audience he in completely overwhelmed that he knew nothing about it. Jem is very protective of his Father as we see in the jail scene but because of Mrs Duboses racist comments that she throws at Jem and Scout about their Father it angers Jem. So he decides to teach her a lesson by beheading her Camilla's, but the only lesson taught is by Atticus to Jem about courage. It is only after Mrs Dubose dies that he realizes her morals and bravery, she did not want to die under the influence of morphine she wanted to die cognisant and conscious- which takes a lot. ...read more.

Near the end of the novel Jem takes on different attitudes and views that he had at the beginning for example before he just accepted that the black people were supposedly inferior to the white but now he cannot comprehend why and he asks this question over and over 'why?'. Calpurnia anticipates this change earlier and takes to calling him 'mister Jem'. We meet Walter Cunningham when Scout begins school for the first time, he unwillingly got her into trouble with the teacher and as a result she beat him up after school. Jem sees this and stops her, even after listening to Scouts begrudging story Jem takes pity on Walter and invites him to lunch. This shows Jem's maturity and illustrates the growing distance between both Scout and Jem, although this is the case it doesn't stop Jem teaching Scout what's right and wrong even if she resents it. In conclusion Jem's growing maturity throughout this book is advanced for somebody of this age, his passing through many stages; puberty, a growing understanding of the world around and he find's it all very overwhelming. He is idealistic like most young people and he wants justice and a democracy that works for the black people. ...read more.