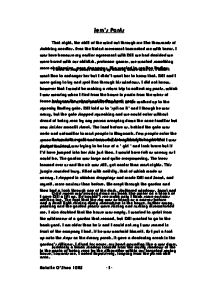 Jem's Pants - That night, the chill of the wind cut through me like thousands of stabbing needles.

Jem's Pants That night, the chill of the wind cut through me like thousands of stabbing needles. Even the tiniest movement tormented me with terror. I was here because my earlier agreement with Dill we had decided we were bored with our childish, pretence games, we wanted something more challenging, more dangerous. W e wanted to see Boo Radley. I tried to stop Scout coming up Radley house with us. I didn't want Boo to endanger her but I didn't want her to know that. Dill and I were going to try and spot Boo through his windows, I did not know, however that I would be making a return trip to collect my pants, which I was wearing when I fled from the house in panic from the wires of fence between the schoolyard Radley back yard. Every one of us was scared. I knew it, as we walked up to the squeaky Radley gate. Dill told us to 'spit on it' and I though he was crazy, but the gate stopped squeaking and we could enter without dread of being seen by any person creeping down the once familiar but now sinister moonlit street. The land before us, behind the gate was eerie and unfamiliar to most people in Maycomb. Few people enter the space between the gate and house I was beginning to regret that I was part of that few. ...read more.

I was sobbing silently and yelled at Dill and Scout to sprint towards the fence by the schoolyard as swiftly as they could. I was trying to ensure that Scout was unhurt, and would not be hurt by anything that satanic night. I was only hoping that she was less than half as intimidated and alarmed by this Radley dwelling-place as I was. Dill and I held the fence while Scout detached herself from the tangles and escaped the villainous grounds. As soon as Dill was through the wire, I bellowed out "Run" in between the sobs and breaths I took. They both bolted, expecting me to reach them quite easily and soon, but without help getting through the muddled wires, I became entwined in them, the cut iron tearing my pants and slashing my legs. The panic of possible forthcoming events engulfed me that moment. In my head I could see Boo Radley and Mr Nathan walking, actually, more like floating, towards me and I saw Atticus telling me how wrong I had been, and how disappointed he was in me. Neither of these things happened though, Scout and Dill returned to enquire my absence from the escape, which obviously, being stuck in the fence, I was unable to take part in. My pants were glued to many wires, my legs, however, were not. ...read more.

I have to do this, so don't you dare go and tell Atticus. Either stay here and keep your mouth closed or come with me." I replied, extremely quietly. She did not want to come with me and she would not tell Atticus, so I left. When I heard a slightest movement while I was walking towards the Radley House, it petrified me, every single one. I was thinking `will Boo be there waiting for me? Ready to hurt me and haunt me?' I tried to think about other things. Impossible. I tried to stop thinking altogether. Also impossible. I now turned the corner of the schoolyard, to the fence. I had to stop. My pants were not mangled in the wires they were folded neatly on top of the fence. They had also been completely repaired, no holes or tears at all were left, each one sewed up neatly. Mr Nathan must have done it, I thought but then I realised that he would have called Atticus on the telephone when he had found them, it was not him. It must have been Boo then. Nobody else came around here. Although, Boo was evil why would he do this? This puzzled me and it was imprinted into my thought stream for the next week. Maybe Mr Boo Radley was not as evil as we had first thought. Maybe he was just lonely and needed something to do, or someone to talk to. Maybe, just maybe, he could be a friend. Natalie O'Shea 10HS - I - ...read more.