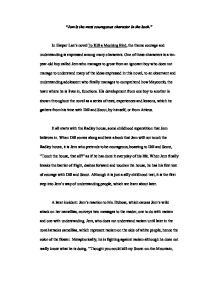 Jem, To Kill A Mockingbird

"Jem is the most courageous character in the book." In Harper Lee's novel To Kill a Mocking Bird, the theme courage and understanding is expressed among many characters. One of these characters is a ten-year-old boy called Jem who manages to grow from an ignorant boy who does not manage to understand many of the ideas expressed in this novel, to an observant and understanding adolescent who finally manages to comprehend how Maycomb, the town where he is lives in, functions. His development from one boy to another is shown throughout the novel as a series of tests, experiences and lessons, which he gathers from his time with Dill and Scout, by himself, or from Atticus. It all starts with the Radley house, some childhood superstition that Jem believes in. When Dill comes along and bets a book that Jem will not touch the Radley house, it is Jem who pretends to be courageous, boasting to Dill and Scout, "Touch the house, that all?" ...read more.

You'll pull it up by the root's, won't you?" shows that racism cannot be changed by instantaneous actions, represented by Jem attacking the camellias. This experience is the foundation of Jem's understanding of racism, and shows that racism is deep rooted like the camellias and that it will take some more time to overcome it. The Mrs. Dubose incident also shows Jem's courage toward the situation. He forgets "that she packed a pistol under her shawls, forgetting that if Mrs. Dubose missed, her girl Jessie probably wouldn't." This again would be a childhood superstition that the children believe in and Jem is able to defy like the Radley house. He learns that Mrs. Dubose was a morphine addict and that "when you know you're licked before you begin but you begin anyway and you see through it no matter what" like she is, that you finally can understand the real definition of courage. ...read more.

Probably the most significant display of Jem's courage is the end-of-the-novel fight with Bob Ewell. Jem tries to defend Scout with everything he has and ends up with a broken arm. Arthur "Boo" Radley comes to the rescue in this scene and saves the children from Bob Ewell, causing Mr. Ewell to fall on his knife, and carrying Jem to Atticus. Boo Radley is another courageous character, who can actually be compared to Jem. Boo defies society and himself, comes out of the house and saves the children in the last pages of the novel. Although Boo does not play as one of the main characters in the novel, he is the start and the end of Jem's experiences with true courage. Through these experiences and lessons learned, Jem manages to understand what true courage actually is. He has now evolved from the 10-year-old inobservant boy to the evaluating, understanding teenager now. Not only is Jem the one who breaks the boundaries of self-courage but Boo Radley does too, in his dangerous, but passionate mission to save the children whom he has grown to love. ...read more.