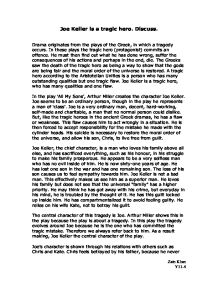 Joe Keller is a tragic hero, who has many qualities and one flaw.In the play 'All My Sons', Arthur Miller creates the character Joe Keller

Joe Keller is a tragic hero. Discuss. Drama originates from the plays of the Greek, in which a tragedy occurs. In these plays the tragic hero (protagonist) commits an offence. He must then find out what he has done wrong, suffer the consequences of his actions and perhaps in the end, die. The Greeks saw the death of the tragic hero as being a way to show that the gods are being fair and the moral order of the universe is restored. A tragic hero according to the Aristotelian Unities is a person who has many outstanding qualities but one tragic flaw. Joe Keller is a tragic hero, who has many qualities and one flaw. In the play 'All My Sons', Arthur Miller creates the character Joe Keller. Joe seems to be an ordinary person, though in the play he represents a man of 'class'. ...read more.

Joe Keller is not a bad man. This effectively makes us see him as a superior man. He loves his family but does not see that the universal "family" has a higher priority. He may think he has got away with his crime, but everyday in his mind, he is troubled by the thought of it. He has this guilt locked up inside him. He has compartmentalized it to avoid feeling guilty. He relies on his wife Kate, not to betray his guilt. The central character of this tragedy is Joe. Arthur Miller shows this in the play because the play is about a tragedy. In this play the tragedy evolves around Joe because he is the one who has committed the tragic mistake. Therefore we always refer back to him. As a result making, Joe Keller the central character of the play. ...read more.

Then later on in the play, when we find out about the broken cylinder heads, we see Joe as a different person. Now Joe Keller is a person who escaped a period of time in Jail. He did this by accusing his friend, partner and neighbour, of the crime that he actually was guilty for. So now we see Joe not as such a high figure, but rather a man who has a major flaw. Now throughout the poem we see him with this one flaw that changes his whole character. This one flaw is what makes Keller a tragic hero. Like a tragic hero, in the end Joe Keller, dies because he committed suicide. The reason he killed himself is because he could no longer live with this guilt and that he wanted set the 'order of the universe' straight, once again. In conclusion, Joe Keller fits the persona of a tragic hero. ?? ?? ?? ?? Zain Khan Y11-4 ...read more.

This essay begins strongly but then becomes repetitive and too superficial and neither the play nor the character are ever really analysed in any depth. When making points make sure to explain them and relate them back to the title and topic of the essay.