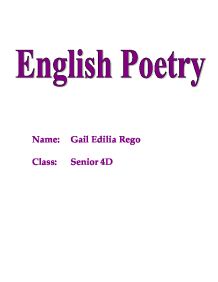 John Clare - Discuss the various ways in which the poets present the theme of love and loss.

Name: Gail Edilia Rego Class: Senior 4D Discuss the various ways in which the poets present the theme of love and loss. "How on earth are you ever going to explain in terms of chemistry and physics so important a biological phenomenon as first love?" Albert Einstein. The subject of love has always inspired poets, writers, and those lucky in love as well. Love is everything its cracked up to be. It really is worth fighting for, risking everything for. And the trouble is, if you don't risk everything, you risk even more. Some of the poets who are so inspired by love are John Clare, Christina Rossetti, Elizabeth Browning and Edith Nesbit who wrote classic love poems. John Clare was an English farmer turned poet of the natural world who wrote many poems, essays and letters on love, politics, sex, corruption, etc. Christina Rossetti was also an English poet who wrote many melancholic poems with symbolic religious themes. Elizabeth Browning was a famous poet of Victorian England best known for her romance with Robert Browning and her "Sonnets From The Portuguese" which is widely read. Edith Nesbit was an English novelist, poet and writer of stories for children though her novels and poems never gained much recognition as much as her stories for children. "First Love" by John Clare is a romantic poem about love at first sight. This poem is linked to love and loss, and has got all the sweet memories of falling in love for the first time and all the pain for losing it at the same time. ...read more.

In this poem we can find the most beautiful pictures of nature is fecundity. "Villegiature" means a withdrawal to the country. Here we learn about conflicts about expectation and reality, romantic notions of what lovers ought to be. Here the poet is soul searching and is questioning herself if she loves him or not. In the poem "A Birthday", in the first part, the first line is a definition and the second line is the meaning of the definition. Apples, which has always been symbolic for sweetness is compared to love. The heart, which is like "an apple tree" is loaded with "thickset fruit", which shows that her love is so intense for her lover. She compares love to rainbow where love has the colours of rainbow, which she further compares to a boat in the sea. In the second poem we learn that in the first part there is rural scenery present here. Here also there is a comparison of love made to a "pear tree" which is a symbol of productive love. She is sitting at a window contemplating and soul searching, questioning herself. "White-curtained shone, and softly lighted:" A kind of mood is set for romantic thoughts. "Your ghost last night climbed uninvited." She is trying to convince herself that she does not like him but in reality she genuinely loves him, because no one comes into your mind unless you want him to. In the first poem, the first part has got all the comparisons of love made to "singing, heat, apple tree, and rainbow shell." ...read more.

"Remember" is a sonnet of 14 lines. "Gone far away into the silent land." This is euphemism used here to show how the poet is referring to death. In this poem you do not find much of figurative speech but through out the poem thee is a gloomy atmosphere. "Villegiature" is a poem of four line stanzas. It comprises of an end rhyme and an internal rhyme. The whole poem is a mix of conflicting emotions and feelings. This poem has a lot of nature imagery used in it like "pear tree bloom, dewy lawn" "First Love" is a poem of three paragraphs of eight line stanzas. It consists of internal rhyme. This poem has a lot of nature imagery. Similes have been used like "Her face it bloomed like a sweet flower, My face turned pale as deadly pale" Personification is also used like 'They spoke as chords do from the string" All the poems bring out the essence of love, but they might lack some elements. Like for "How Do I Love Thee?" the poem starts well enough but then it gradually moves from reality to. "First Love" though, is much more realistic since it shows how a person might feel when being in love. The feelings and reactions are beautifully explained and therefore gives a lasting impression on the reader. "Remember" conveys a message that, remember all the good times the people had and don't remember the depressing memories. Like in the part of the poem where it says, "Better by far you should forget and smile, than that you should remember and be sad." Like forgetting the worse times and keeping a smile on your face rather than remember the worse times and being heartbroken about it. ...read more.