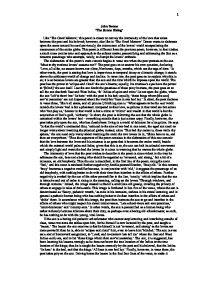 John Donne 'The Sunne Rising' Like 'The Good Morrow,' this poem is meant to convey the immensity of the love that exists between the poet and his beloved; however, also like in 'The Good Morrow' Donne wants to elaborate upon the same conceit he used previously, the microcosm of the lovers' world encapsulating the macrocosm of the entire globe. This poem is different from the previous poem, however, in that it takes a much more jocular tone and approach to the subject matter, personifying and addressing the Sun as a tiresome personage who attempts, vainly, to disrupt the lovers' embrace. The elaboration of the poem's main conceit begins in verse one when the poet protests to the sun 'Must to thy motions lovers' seasons run?' The poet goes on to answer his own question, declaring 'Love, all alike, no season knows nor clime,/Nor hours, days, months, which are the rags of time.' In other words, the poet is stating that love is impervious to temporal decay or climactic change; it stands above the sublunary world of change and decline. In verse two, the poet goes on to explain why this is so; it is so because lovers are greater than the sun and the time which he imposes upon the world. ...read more.

The immensity of love that the poet wishes to describe in the poem is also evident in the way he addresses the sun, here not a being who should be regarded as 'reverend, and strong,' but a bit of a nuisance, an old busybody. Thus the sun is described, in the first line of the poem, using the noun 'fool,' and this noun is rendered further negative by double premodification, 'Busy old.' In this context, 'busy' becomes a negative modifier because, in conjunction with 'old,' it suggests the personage of an old busybody, with nothing better to do with their time than interfere in the affairs of others. Further negativity is evoked by the use of the other premodifier in the line, 'unruly,' which implies that the sun is intrusive and out of order in rising in the morning, calling on the lovers 'Through windows, and through curtains.' Indeed, the image created is that of a scurrilous old gossip, invading the privacy of others to engage in tales of tittle-tattle. This image is furthered in line five of the verse, where the sun is denominated as 'Saucy, pedantic wretch,' as rude in his intrusion, tedious in his moral lecturing, and in general a pathetic human being who has nothing better to do than interfere in the affairs of others and 'chide' them. ...read more.

All in all, therefore, the poet and his mistress have a relationship with the sun that is that of superior to inferior: portrayed as a meddling old schoolmaster who has not learned his lessons well, pity is finally taken on the sun so he can entire a peaceful retirement. This poem is also noted in that in displays the theories of Renaissance astronomy. In contrast to the 'modern' Copernican world view, that the earth rotates around the sun, this poem works around the older, Ptolemaic view of the cosmos, in which the sun rotates around the earth. As well as this, the poem works off the supposition of celestial spheres - or lines - along which the planets and sun supposedly rotated. This idea appears in the last line of the poem, where the poet asserts 'This bed thy center is (ie. The earth), these walls thy sphere (ie. The celestial path of the sun's rotation). In short, this poem works in tandem with 'The Good Morrow' since both desire to assert the immensity and permanence of the poet's love, and both use the conceit of the human relationship, the microcosm, coming to dominate over the whole created world, the macrocosm; in this regard, both also use images to do with Renaissance science However, the difference between the two poems is one of tone: whereas 'The Good Morrow' takes a more serious attitude to the subject, 'The Sunne Rising' is much more jocular and playful. 1 ...read more.