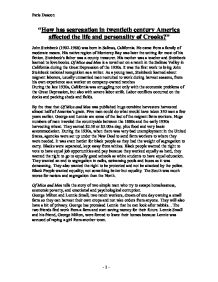 "How has segregation in twentieth century America affected the life and personality of Crooks?" John Steinbeck (1902-1968) was born in Salinas, California. He came from a family of moderate means. His native region of Monterey Bay was later the setting for most of his fiction. Steinbeck's father was a county treasurer. His mother was a teacher and Steinbeck learned to love books. Of Mice and Men is a novel set on a ranch in the Salinas Valley in California during the Great Depression of the 1930s. It was the first work to bring John Steinbeck national recognition as a writer. As a young man, Steinbeck learned about migrant laborers, usually unmarried men recruited to work during harvest seasons, from his own experience as a worker on company-owned ranches During the late 1930s, California was struggling not only with the economic problems of the Great Depression, but also with severe labor strife. Labor conflicts occurred on the docks and packing sheds and fields. By the time that Of Mice and Men was published huge combine harvesters harvested almost half of America's grain. Five men could do what would have taken 350 men a few years earlier. George and Lennie are some of the last of the migrant farm workers. Huge numbers of men traveled the countryside between the 1880s and the early 1930s harvesting wheat. They earned $2.50 or $3.00 a day, plus food and very basic accommodation. During the 1930s, when there was very bad unemployment in the United States, agencies were set up under the New Deal to send farm workers to where they were needed. It was even harder for black people as they had the weight of segregation to carry. Blacks were separated, kept away from whites. Black people wanted the right to vote to have equal job opportunities and pay because they worked equally as hard, they wanted the right to go to equally good schools as white students to have equal education. ...read more.

We later find out that Crooks can pitch horseshoes really well. Carlson says "Jesus, how that nigger can pitch shoes." Then Crooks gets complimented by Slim and Carlson as they say how he is really good and does not give any body a chance. The first description that we get of Crooks is when he pops his head into the bunk house to inform Slim that he has warmed up the tar for the mule. The description we get of him is "...a lean negro head, lined with pain, the eyes patient." We get a clue of how his life must be when it says 'lined with pain', we get the impression that he has a hard life and that he must be a patient person. He even offers to do the job for Slim, which shows a hidden respect for Slim, and maybe even some kindness. All the ranch workers keep saying 'nigger' when they talk about him. As I said before the ranch hands do not call him that because they mean to insult him as a man but to constantly remind us that black people were degraded in this sort of way everyday. Steinbeck does not keep using the word 'nigger' to insult but to remind us that black people were called this on a daily basis and this was the way it was in the 1930's. Lennie and George are given many impressions of Crooks, similar to our impression as the reader. They are told that he was crippled by a horse, that he is beaten and used as a stress toy by the boss, that he is segregated from everyone and that he will stand up for himself. In section four we are finally introduced to Crooks and to his room. We learn that his room is at the back of the stables and there is a small square four paned window. ...read more.

As a result he become a remote, sorrowful and bitter man. He has no one to speak to or play cards or even to see. He is secluded in his little room with only books for company. And as he explains, "Books ain't no good...A guy goes nuts if he ain't got nobody." He has only got books and he has experienced the feeling of going nuts. He is overwhelmed, even though he tries to cover it up with anger, when Candy and Lennie come into his room and start talking to him. And for a brief moment he gets dragged into their dreams and he feels that the dream might become a reality. But then Curley's wife interrupts. She then backs him down into his little protective shell when she starts threatening him. And he backs down because he knows all she would have to do is accuse him of rape or harassment and he would be lynched without even having a word in. When she leaves he tells Candy that he is not interested anymore in the land and farm. But deep down he is but he thinks that because of his colour he will never be allowed an equal and peaceful life. Steinbeck has purposely included Crooks' story in the novel because he as a young man, learned about migrant laborers, usually unmarried men recruited to work during harvest seasons, from his own experience as a worker on company-owned ranches. He experienced segregation and he saw how it affected black people. He has tried to explain about segregation throughout the story. The characters keep repeating the derogatory term 'Nigger' throughout the whole story, but this is only to remind us how racism was common and black people were degraded in this way on a daily basis. Even though that word was used casually people like Crooks felt the full hatefulness of it. Steinbeck believes that segregation was morally wrong and that black people shoud have had equal rights. They never asked for more, they only asked for equality... Paris Deacon ?? ?? ?? ?? Paris Deacon - 1 - ...read more.