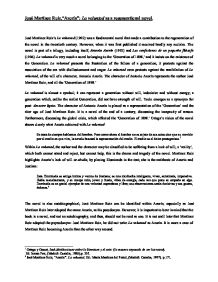 Jos� Mart�nez Ruiz,"Azor�n": La voluntad as a regenerational novel. Jos� Mart�nez Ruiz's La voluntad (1902) was a fundamental novel that made a contribution to the regeneration of the novel in the twentieth century. However, when it was first published it received hardly any acclaim. The novel is part of a trilogy, including itself, Antonio Azor�n (1903) and Las confesiones de un peque�o fil�sofo (1904). La voluntad is very much a novel belonging to the 'Generation of 1898,' and it insists on the existence of the Generation. La voluntad presents the frustration of the failure of a generation; it protests against the association of the era with disillusionment and anger. La voluntad even protests against the annihilation of La voluntad, of the will of a character, Antonio Azor�n. The character of Antonio Azor�n represents the author Jos� Mart�nez Ruiz, and all the 'Generation of 1898.' La voluntad is almost a symbol; it can represent a generation without will, indecisive and without energy; a generation which, unlike the realist Generation, did not have strength of will. Yecla emerges as a synonym for post- desastre Spain. The character of Antonio Azor�n is placed as a representation of the 'Generation' and the alter ego of Jos� Mart�nez Ruiz. It is a novel of the end of a century, discussing the incapacity of reason. Furthermore, discussing the global crisis, which affected the 'Generation of 1898.' Ortega's vision of the novel shows clearly what Azor�n achieved with La voluntad: Se trata de siempre hablarnos del hombre. Pero como ahora el hombre no es sujeto de sus actos sino que es movido por el medio en que vive, la novela buscar� la representaci�n del medio. El medio es el �nico protagonista.1 Within La voluntad, the author and the character may be classified to be suffering from a lack of will; a 'reality', which both cannot stand and reject, but cannot help, this is the drama and tragedy of the novel. ...read more.

The prologue has symbolic significance it does not mention the protagonist but the moral atmosphere that would influence him. The church ends up being a paralytic anachronism as it was built when cathedrals were no longer built. This reflects the lack of will of Spain and is a metaphor of the world in which Antonio Azor�n was born into, brought up in and lived. Moreover, the church is a metaphor for the Spain in which the 'Generation of 1898' found themselves, and wrote about. The first part of the novel is narrated in the third person; the narrator is omniscient, which is to say that he is aware of what is happening within the novel. Together with the epilogue this is the most objective part of the novel. The second part of the novel is in third person; the narrator appears to be coming from the inside of the novel, thus attempting to interiorise Antonio Azor�n. The third section marks a culmination in the novel written in first person Antonio Azor�n talks about himself. The first part is more objective, distanced from Azor�n and always set in Yecla. In this first part the protagonist appears, to the reader, to be taking a back seat, he appears somewhat blurry and is not quite what the reader would expect from a protagonist. Antonio Azor�n appears to be a spectator or listener of the ideas of others. There are only a few chapters in which he appears centre stage moving constantly towards an approximation. In the beginning, Mart�nez Ruiz does not tell us information about Antonio Azor�n, his technique is to slowly close in on the character, almost like a camera zooming in on its subject. Mart�nez Ruiz in this section reveals a discovery of Azor�n through the things that surround him. Later, there are various conversations in which he does not take part he only listens. The author thus, starts to narrate the failure of the Generation in relation to the failure of Antonio with Augustina. ...read more.