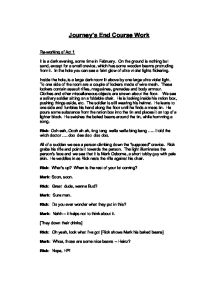 Journey's End Course Work Re-working of Act 1 It is a dark evening, some time in February. On the ground is nothing but sand, except for a small crevice, which has some wooden beams protruding from it. In the hole you can see a faint glow of ultra violet lights flickering. Inside the hole, is a large dark room lit above by one large ultra violet light. To one side of the room are a couple of lockers made of wire mesh. These lockers contain assault rifles, magazines, grenades and body armour. Clothes and other miscellaneous objects are strewn about the floor. We see a solitary soldier sitting on a foldable chair. He is looking inside his ration box, pushing things aside, etc. The soldier is still wearing his helmet. He leans to one side and fumbles his hand along the floor until he finds a mess tin. He pours some substance from the ration box into the tin and places it on top of a lighter block. ...read more.

BBC got it all on tape. Rick: Weird things are happening man. I sense the final push is coming soon. More recruits are arriving day by day and each jeep has about 20 crates of ammo. Mark: Jeez dude, relax yeah. Rick: How can I? Eric has used all the morphine for his own personal use. Mark: He downs those after shocks like they are apple juice, he's one hell of a sic man! Rick: They're turning him into a freak show. They place bets to see how much he can down before passing out. - Bunch of pigs! Mark: Yeah well ... he is quite heavy Rick: How you can like him is beyond me. Mark: He downs one hell of a drink, that's all I am saying. Rick: He likes his e's as well, don't have a clue where he gets them from, mind you. Mark: Any way, like I said, I came here because of Eric, he wants to know about the plans that you were given. ...read more.

The story was kept the same but a few elements had to be changed. For instance, Rick cooking baked beans instead of drying a sock. The same style of writing was applied. The scene was kept humorous. Instead of singing that old fashioned song, I decided to make him sing a bit of "The Cartoons" this idea worked well. The soldiers marvelling over the baked beans were like the marvelling of the damp sock, except that I expanded the "Amazing" beans scene. The language was changed to remove it's old fashioned sentences, for example on page 14 Hardy says "Oh, you sweet, sentimental old darling" this sort of language would be misinterpreted by today's audience and would be considered very camp and may cause offence. The phrases were changed to a more casual slang with the use of "Dude" and "Man" and I distanced the characters feelings to make it feel more repressed, and soulless, just like a real war. Changes to every day words were essential in making the play seem more up to date because culture and regional differences all affect language, I tried to give a broad casualness to it. ...read more.