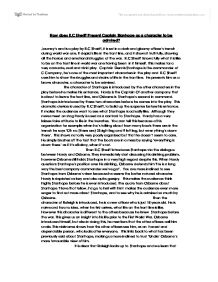 How does R.C Sheriff Present Captain Stanhope as a character to be admired? Journey's end is a play by R.C Sheriff, it is set in a dark and gloomy officer's trench during world war one. It depicts life in the front line, and it shows it truthfully, showing all the horrors and emotional struggles of the war. R.C Sheriff knows fully what it is like to be on the front line in world war one having been in it himself. This makes for a very accurate, real and vivid play. Captain Dennis Stanhope is the commander of C Company, he's one of the most important characters in the play and R.C Sheriff uses him to show the struggles and strains of life in the front line. He presents him as a brave character, a character to be admired. The character of Stanhope is introduced by the other characters in the play before he makes his entrance. Hardy is the Captain Of another company that is about to leave the front line, and Osborne is Stanhope's second in command. Stanhope is introduced by these two characters before he comes into the play. This dramatic device is used by R.C Sheriff, to build up the suspense before his entrance. It makes the audience want to see what Stanhope is actually like. ...read more.

After a big build up around him, Stanhope is introduced to the play, due to what has been said before his entrance, R.C Sheriff makes it so his arrival is highly anticipated by the audience. The way he is described is very important to our first impressions of seeing him. He is tall and attractive, a sort of heroic looking character which makes him immediately likeable. He is well kept, with 'carefully brushed' hair and a 'well cared' for uniform. This shows how he cares about his appearance and image (good personal qualities that are being associated with him, before he even speaks). Then we have the fact that his uniform is 'war-stained and old' and he has dark shadows under his eyes. This makes the audience like admire him even more because they can see his experience and how much effort he has put into commanding his company. Dark circles are often associated with tireless work. As soon as Stanhope makes his entrance he shows to the audience that he is a very experienced commander with the way that he co-ordinates the trench affairs. He knows what times everyone should be on patrol, this shows that he is clearly an excellent captain and it links back to the contrast with Hardy. ...read more.

The incident escalates when the pair are arguing with each other and Hibbert strikes his superior officer, Stanhope. Stanhope is furious, he threatens to shoot him; however he does share some compassion for Hibbert despite what he thinks of him. He then makes him feel better by telling him that all the men share the same fears. The way Stanhope is shown in this part of the play makes the audience understand what a compassionate and understanding character he is. People admire him for this. Lastly the way that Stanhope tends to Raleigh in the closing stages of the play is important in showing the inner qualities of Stanhope. He keeps a strong heart for the sake of Raleigh even though his world is falling apart (with the death of Osborne and now the injury of Raleigh). He re-assures him that he is okay just by being there, and makes Raleigh more comfortable. The way that he tends to Raleigh so avidly shows how he really feels about him, he gives him water for example. This kind and loving Stanhope is the last depiction we get of him and it definitely ends his character on a very admirable note. I think R.C Sheriff has done a superb job at making Captain Stanhope a character to be admired; he uses both subtle and powerful devices to make it clear what Stanhope is like and he is clearly an admirable character, a true war hero. ...read more.