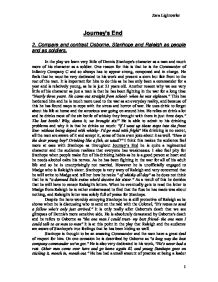 Journey's End - Compare and contrast Osborne, Stanhope and Raleigh as people and as soldiers.

Journey's End 2. Compare and contrast Osborne, Stanhope and Raleigh as people and as soldiers. In the play we learn very little of Dennis Stanhope's character as a man and much more of his character as a soldier. One reason for this is that he is the Commander of Infantry Company C and so always has to appear strong, composed and in charge. He feels that he must be very dedicated to his work and present a stern but fair front to the rest of the men. It is important for him to do this as he has only been a commander for a year and is relatively young, as he is just 21 years old. Another reason why we see very little of his character as just a man is that he has been fighting in the war for a long time "Nearly three years. He came out straight from school- when he was eighteen." This has hardened him and he is much more used to the war as an everyday reality, and because of this he has found ways to cope with the stress and horror of war. He uses drink to forget about his life at home and the atrocious war going on around him. He relies on drink a lot and he drinks most of the six bottle of whisky they brought with them in just three days." ...read more.

which does not suggest that he is filled with enthusiasm or that he is grateful that he has been chosen to lead the raid. Instead of reacting in the way that Raleigh did, Osborne tries not to talk about the raid and he orders Trotter not to mention the danger of it to Raleigh, "There's no need to tell him it's murder". His reaction to Osborne's death shows how young and inexperienced he is at witnessing death unlike Stanhope to whom death is almost too familiar. He is appalled at how Stanhope, Trotter and Hibbert sat down after Osborne's death and: smoked the cigars, drank the champagne and ate the fresh chicken, which had been sent up specially to celebrate a successful raid. All he can think of is how could he "sit down and eat that- when- when Osborne's- lying- out there." He soon realises how much this statement hurts Stanhope and how close he and Osborne were. He also understands that there is a" limit to what a man can bear" and that you must accept death and move on in these circumstances. Although he hasn't been there for a very long time he is already respected by the other officers Trotter comments, " 'E's got pluck. Strong lad, too-the way he came back through the smoke after that raid, carrying that boche under 'is arm like a baby." Also earlier in the play Osborne remarks that" He's a good-looking youngster. ...read more.

However, unlike Stanhope he can cope with the war without having to be supported by crutches like alcohol and his nerves have remained much more in tact than Stanhope's. He realises the reality that the raid they are asked to go on is a suicide mission and that he is unlikely to return. Before he leaves he asks Stanhope if he would mind looking after a few thing to send to his wife if he is not able to return from the raid: " I say, don't think I'm being morbid, or anything like that, but would you mind taking these?" He is the most supporting officer, as before the raid he tries to reassure Raleigh by saying, " I'm glad it's you and I- together, Raleigh" and he is loyal to the end of his life as he was killed by a hand grenade while he was waiting for Raleigh. After considering all three characters I feel that Osborne's calmness and wisdom strongly compliments Raleigh's enthusiasm and energy. Stanhope appears to balance the situation with his bold character. He organises Osborne, Raleigh and the other officers to the best of his ability but as a result he needs Osborne to support him through difficult circumstances. Raleigh respects and looks up to Stanhope and Osborne and learns how to deal with war through them. I found that the three characters work well together in the play and they keep the audience interested and involved at all times. Zara Lightowler 3 4 ...read more.