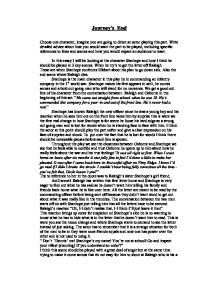 Journey's End - In this essay I will be looking at the character Stanhope and how I think he should be played in 3 key scenes. When he try's to get the letter off Raleigh.

Journey's End Choose one character, imagine you are going to direct an actor playing this part. Write detailed advice about how you would want the part to be played, including specific references to lines and scenes and how you would expect an audience to react. In this essay I will be looking at the character Stanhope and how I think he should be played in 3 key scenes. When he try's to get the letter off Raleigh. These are when Stanhope confronts Hibbert about his plan to go down sick. Also the end scene where Raleigh dies. Stanhope is the main character in this play he in commanding an infantry company in the 1st world war. Stanhope makes his first appears in act1, he comes across and a bold out going man who will stand for no nonsense. We get a good out line of his character from the conversation between Raleigh and Osborne in the beginning of this act. "He came out straight from school-when he was 18. He's commanded this company for a year-in and out of the front line. He's never had a rest." Stanhope has known Raleigh the new officer since he was a young boy and his reaction when he sees him out on the front ...read more.

This scene will build up quite a bit of tension between them both and this needs to be made clear. Once Raleigh has left the mood calms down a bit but there is still a bit of tension after the heavy argument between them both. Stanhope then gets Osborne to read out the letter to him expecting it to reflect badly on him. "he's always cheering them up with jokes, and making them keen about things, like he did the kids at school. I'm awfully proud to think he's my friends" The ending there of the letter gives us a incite to the way Raleigh looks up to Stanhope and how he thinks of him as some kind of god. When Osborne is reading the letter I think Stanhope should sit still and listen with not much expression on his dace and look down at the table as if to reflect on what he has just said and how he regrets the way he acted. You see this side of Stanhope again but in very different circumstances and with a deferent person on the resaving end. It is getting near the time for the men to go over the top this is a terrifying time for them all and when Hibbert approaches ...read more.

We can she this by when they are on first name terms not last. Stanhope is clearly very up set at the thought of watching a dear friend die but try's to keep a brave face. He doesn't loose his calmness which he seems able to retain in all emotional situations. Although Stanhope is aware of how severe the injuries to Raleigh are he doesn't talk about them and keeping a calm tone to his voice. Even though he is crying he never loose the calm together ness he has had throughout the play. The fact that Stanhope isn't aware that Raleigh is dead until moments after he has died this give a clear and sharper reaction that the audience can see. The part of Stanhope changes all the time and is not always how you would expect it to be. The fact that his emotions change quite a bit throughout the play will help the audience to stay fixed on him as he is always changing. I think that the last scene will be the one the audience will relate to best and if it is played with the tension building throughout it will help to capture the audiences attention all the way through it. ...read more.