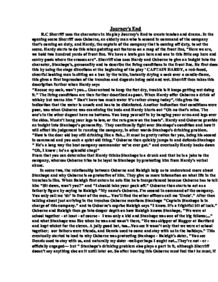 Journey's End R.C Sherriff uses the characters in his play Journey's End to create tension and drama. In the opening scene Sherriff uses Osborne, an elderly man who is second in command of the company that's coming on duty, and Hardy, the captain of the company that is coming off duty, to set the scene. Hardy starts to do this when pointing out features on a map of the front line, "Here we are, we hold two hundred yards of front line. We have a lewis gun here and one in this little sap here and sentry posts where the crosses are". Sherriff also uses Hardy and Osborne to give an insight into the character, Stanhope's, personality and to describe the living conditions in the front line. He first does this by using the stage directions at the beginning of the play ' CAPTAIN HARDY, a red-faced, cheerful looking man is sitting on a box by the table, instantly drying a sock over a candle-flame, this gives a first impression of the trenches and dugouts being cold and wet. Sherriff then takes this description further when Hardy says "Excuse my sock, won't you... Guaranteed to keep the feet dry, trouble is it keeps getting wet doing it." The living conditions are then further described as poor. When Hardy offer Osborne a drink of whisky but warns him " Don't have too much water it's rather strong today", this gives the indication that the water is unsafe and has to be disinfected. Another indication that conditions were poor, was when Osborne was examining the beds and Hardy blurts out "Oh no that's mine. The one's in the other dugout have no bottoms. You keep yourself in by hanging your arms and legs over the sides. Mustn't hang your legs to low, or the rats gnaw on the boots". Hardy and Osborne provide an insight into Stanhope's personality. ...read more.

and " Well, then, sir. If they don't get through the first day, they'll attack the next day and the next -" The incident with Hibbert escalates the tension even more because Hibbert says "Why, go sick - go down the line. I must go into hospital and have some kind of treatment... I'll go right along now, I think-". This sends Stanhope into a frenzy, he tells Hibbert to stay in the dugout and Hibbert starts to argue that he has the right to see the doctor, "I'm going to see the doctor. He'll send me to a hospital when he understands -" but Stanhope tries to convince Hibbert that the doctor won't send him to hospital "I've seen the doctor. I saw him this morning. He won't send you to hospital, Hibbert; he'll send you back here." Hibbert refuses to accept this and goes into his dugout to get his stuff, this sent Stanhope over the edge. He took out his revolver, started examining it, stops Hibbert when he returns from his dugout and tries to reason with him one last time, eventually Hibbert blindly strikes uot at Stanhope with his stick as he is held from behind by Stanhope. Stanhope takes action and catches the stick smashes it, throws it on the floor, shouts at Hibbert and then points his revolver at him and says "If you went, I'd have you shot for - deserting. It's a hell of a disgrace - to die like that. I'd rather spare you the disgrace. I'll give you half a minute to think. You either stay here and try to be a man - or you try to get out of that door - to desert." Hibbert then has a nevous breakdown and decides to stay in the trenches and the audience feels the tension start to lessen. There is a tense start to Act three Scene one with the men awaiting the start of the raid. ...read more.

Then comes the whistle of falling shells; first one by itself then two almost together. Quicker and quicker they come, till the noise mingles together in confused turmoil." This give the audience the impression of the battlefield as very noisy and having a very poor visual conditions. All of this leaves us in no doubt as to what Sherriff wants his audience to feel about the war. Sherriff wants the audience to see Stanhope and Raleigh represent what has happened to a generation of boys in W.W.1 These men were trained to kill, were eventually killed themselves and the pressure they were under while they were at the front, men such as sergants and captains having the responsibility of looking after men, also leads us into a decision on what war was like. I also think that Sherriff wanted the audience to feel that society was never the same because not only were there thousands of people killed, they must have been afraid that another world war might happen. It did and after that every developed country today has specialist defences against it. The war also contrasts with Stanhope's school days in the following way: Stanhope stayed at Raleigh's house in the holidays and was supposedly his friend and he cared about Raleigh and his sister, but doesn't want him in the company in case he becomes injured or even killed. Stanhope doesn't think highly of the Colonel because he only cares about getting a result and pleasing the brigadier and doesn't realise that Osborne is dead until Stanhope says to him in a sarcastic tone "How awfully nice - if the brigadier's pleased." The death of Osborne really shows on Stanhope because he shouts at Raleigh and tells Raleigh to eat his food and have a drink of whisky, basically forcing Raleigh to do stuff. When Raleigh is dying Stanhope completely changes his tune, he tries to comfort Raleigh and says that he will send him home, and after Raleigh passes away he sits there until he is called for and the play ends. ...read more.