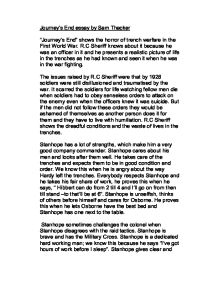 Journey's End essay by Sam Thacker "Journey's End" shows the horror of trench warfare in the First World War. R.C Sheriff knows about it because he was an officer in it and he presents a realistic picture of life in the trenches as he had known and seen it when he was in the war fighting. The issues raised by R.C Sheriff were that by 1928 soldiers were still disillusioned and traumatised by the war. It scarred the soldiers for life watching fellow men die when soldiers had to obey senseless orders to attack on the enemy even when the officers knew it was suicide. But if the men did not follow these orders they would be ashamed of themselves as another person does it for them and they have to live with humiliation. R.C Sheriff shows the dreadful conditions and the waste of lives in the trenches. Stanhope has a lot of strengths, which make him a very good company commander. Stanhope cares about his men and looks after them well. He takes care of the trenches and expects them to be in good condition and order. We know this when he is angry about the way Hardy left the trenches. ...read more.

The only way she can find out is by Raleigh saying it in his letters so Stanhope decides to censor his letter. We know this because he says, "Go sleep yourself, I censor his letters, do you see, Uncle you watch and see he doesn't smuggle and letters away". Stanhope is afraid of dying because all the men he went out with in the beginning are all dead now. Stanhope is also aware of the dangers of war and the waste of lives and this makes him very afraid. If I were the director I would show how Stanhope is irritable in this dramatic outburst by showing how much whisky he drinks and he keeps topping up his glass while he gulps it down like water. I would show how he always has his whisky mug in his hand. I would show Stanhope's drunken laughter, which you can tell because it sounds like a sarcastic laugh. He is irritable with Osborne by snapping back when Osborne says something like when Osborne says, " Why should he he's not a -". Then Stanhope interrupts and says " Exactly he's not a damned little swine who'd deceive his sister ". ...read more.