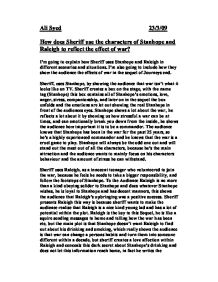 Ali Syed 23/3/09 How does Sheriff use the characters of Stanhope and Raleigh to reflect the effect of war? I'm going to explain how Sheriff uses Stanhope and Raleigh in different scenarios and situations. I'm also going to include how they show the audience the effects of war in the sequel of Journeys end. Sheriff, uses Stanhope, by showing the audience that war isn't what it looks like on TV. Sheriff creates a box on the stage, with the name tag (Stanhope) this box contains all of Stanhope's emotions, love, anger, stress, companionship, and later on in the sequel the box unfolds and the emotions are let out showing the real Stanhope in front of the audiences eyes. ...read more.

Stanhope will always be the odd one out and will stand out the most out of all the characters, because he's the main attraction and the audience wants to mainly focus on his characters behaviour and the amount of stress he can withstand. Sheriff uses Raleigh, as a innocent teenager who volunteered to join the war, because he feels he needs to take a bigger responsibility, and follow the footsteps of Stanhope. To the Audience Raleigh is no more than a kind obeying solider to Stanhope and does whatever Stanhope wishes, he is loyal to Stanhope and has decent manners, this shows the audience that Raleigh's upbringing was a positive success. ...read more.

that Stanhope doesn't want Raleigh to find out about his drinking and smoking, which really shows the audience is that war can change a persons habits and turn them into someone different within a decade, but sheriff creates a love affection within Raleigh and conceals this dark secret about Stanhope's drinking and does not let this information reach home, in fact he writes the opposite and saying all is well in the trench and Stanhope hasn't changed a bit, this shows the audience, some secrets are meant to be kept a secret and understanding Stanhope's situation is more wise instead of sending it off home and worrying others about his foul habits. ...read more.