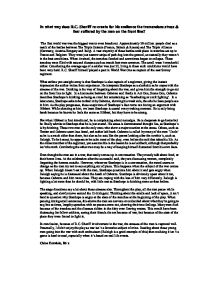 In what way does R.C. Sheriff re-create for his audience the tremendous stress & fear suffered by the men on the front line? The first world war was the biggest war to even break out. Approximately 20 million people died as a result of the battles between The Triple Entente (France, Britain & Russia) and The Triple Alliance (Germany, Austria-Hungary and Italy). A vast majority of these battles took place in trenches set up in France and Belgium. They were just narrow strips of path dug into the ground, so naturally they weren't in the best conditions. When it rained, the trenches flooded and sometimes began to collapse. These trenches were filled with rats and diseases such as trench foot were common. The smell wasn't wonderful either. Considering the average age of a solider was just 25, living in these such conditions would have been very hard. ...read more.

For when Hibbert is first introduced, he is complaining about neuralgia. He is desperate to go home but he finally admits to Stanhope that he is just scared. His stress is demonstrated thought lies, as Stanhope's is by drinking. These two men are the only ones who show a major reaction to the stress. Others, such as Trotter and Osborne seem less fazed, and rather laid back. Osborne is called by many of the men 'Uncle' as he is a much older than them, but also as he acts like the parent looking after the newbie's, such as Raleigh. To be honest, he appears to be calm most of the play, even before the raid that takes his life. As the oldest member of the regiment, you assume this is the reason he is so laidback, although that probably isn't the truth. Comforting the other men may be a way of keeping himself distracted from his own fears. ...read more.

Thinking about the smells and lack of space, it isn't hard to question why Stanhope is angry at the state of the trenches at the beginning of the play. When pausing during small sentences, this shows the men are nervous or undecided about what they're going to say, but at times, lengthy speeches with no pauses come out, showing their true feelings. Many men died because of the trenches and the diseases ridden in the dirty over flowing waters. This would have been distressing for fellow soldiers, seeing their friends die not because of war, but because of the state of the place they were forced to fight in. In conclusion, because of R.C. Sheriff involvement in the war, the stresses of the men is captured well. Personally, I didn't enjoy the play as war isn't a favourite subject of mine. Reading about these young men going into the war with such enthusiasm (Raleigh is a good example of this) then realising it isn't a game is hard to read, especially when it's based on real life events. Chloe Entwisle, B6 x ...read more.