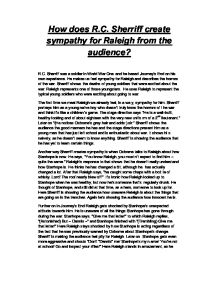 Journeys End Coursework. How does R.C. Sherriff create sympathy for Raleigh from the audience?

How does R.C. Sherriff create sympathy for Raleigh from the audience? R.C. Sherriff was a soldier in World War One and he based Journey's End on his own experience. He makes us feel sympathy for Raleigh and describes the horrors of the war. Sherriff shows the deaths of young soldiers that were excited about the war. Raleigh represents one of those youngsters. He uses Raleigh to represent the typical young soldiers who were exciting about going to war. The first time we meet Raleigh we already feel, in a way, sympathy for him. Sherriff portrays him as a young na�ve boy who doesn't truly know the horrors of the war and think it's like a children's game. The stage direction says "He is a well-built, healthy looking and of about eighteen with the very new uniform of a 2nd lieutenant." Later on "(He notices Osborne's grey hair and adds:) sir." Sherriff shows the audience the good manners he has and the stage directions present him as a young man that has just left school and is enthusiastic about war. ...read more.

Stanhope's my name! You're not at school! Go and inspect your rifles!" Here Raleigh stands in amazement, as he never expected such aggressive reaction. We, as the audience, feel sorry for Raleigh. When Raleigh is told that he is going to participate in the raid we get to know more about him. Here he shows how keen he is about the raid and the happiness he feels at that moment, which is a natural thing for most of the young people who join the war. When he was told that he was going to participate in the raid he said, "I say - it's more frightfully exciting!" Here, Sherriff shows the audience how na�ve he is as he doesn't really understand the danger of it. Further on, when they're about to make the raid, Osborne says, "I've got a sort of empty feeling inside." To which Raleigh replied with "That's just what I've got!" This shows that Raleigh was trying to hide his feelings to Osborne and sound "brave" but the audience knows that he's scared, making us feel sympathy for him. ...read more.

Raleigh asks "It - it hasn't gone through, has it? It only just hit me? - And knocked me down?" to which Stanhope replies, "It's just gone through a bit, Jimmy." Here the audience feels a lot of sympathy for Raleigh, and the fact that Stanhope calls him by his first name shows the seriousness of the discussion and that he might not survive. What makes the audience feel more sympathy for him is when he tries to stand up to keep fighting and the amount of time he repeats Stanhope's name to ensure he's near him. This part of the play makes the audience feel even sadder. The fact that he has only been there for three days is what makes the audience sad the most; that such a young boy that was enthusiastic about the war and wanted to become a hero died so early. In my opinion this play is very effective and vividly portrays the horrors of the war. The audience would feel great sympathy for Raleigh and some other characters. We, the audience, ask ourselves questions like "What if that happened to me or a close person I knew?" ...read more.