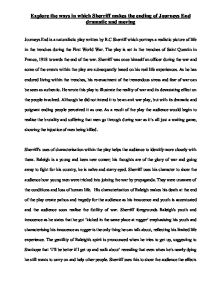 Explore the ways in which Sherriff makes the ending of Journeys End dramatic and moving Journeys End is a naturalistic play written by R.C Sherriff which portrays a realistic picture of life in the trenches during the First World War. The play is set in the trenches of Saint Quentin in France, 1918 towards the end of the war. Sherriff was once himself an officer during the war and some of the events within the play are subsequently based on his real life experiences. As he has endured living within the trenches, his re-enactment of the tremendous stress and fear of war can be seen as authentic. He wrote this play to illustrate the reality of war and its devastating effect on the people involved. Although he did not intend it to be an anti war play, but with its dramatic and poignant ending people perceived it as one. As a result of the play the audience would begin to realise the brutality and suffering that men go through during war as it's all just a waiting game, showing the injustice of men being killed. Sherriff's uses of characterisation within the play helps the audience to identify more closely with them. Raleigh is a young and keen new comer; his thoughts are of the glory of war and going away to fight for his country, he is na�ve and starry eyed. ...read more.

The first significant and immensely moving image that the audience are presented with is when the sergeant major comes down the stairs 'carrying Raleigh like a child in his huge arms' as it shows Raleigh's vulnerability and fallibility and the simile 'like a child' accentuates this. The stage image can also be hugely ironic as it was Raleigh's decision to be in the war but by doing so he has killed himself, angering the audience as he is so young. Furthermore, they would feel sympathy for him as he seems so vulnerable making them realise the devastating effect war has on the men involved. The sergeant major then places Raleigh on Osborne's bed and looks furtively at his palms and wipes the blood as if dismissing Raleigh, as he knows that it's a child's blood he has on his hands. It seems it will remain on his conscious, intensifying the tragedy of Raleigh's soon to be death within the audience as they also feel shocked by his injury. As the ending of the play approaches, Sherriff uses a final stage image to depersonalise Stanhope as he 'stiffly goes up the stairs of the trenches, his tall figure black against the dawn sky' depersonalising Stanhope and shows how he has just become another soldier in the war on their own personal quest. ...read more.

Sherriff only focuses on one trench to try and portray a realistic picture of trench life. He creates an intensely dramatic ending by using the setting of stage as 'a shell bursts on the dugout roof, stabbing out the candle flame' and 'allowing the timber props of the roof to cave in slowly, sandbags fall and block the passage to the open air, leaving no way out or in'. The slow tumble of the sandbags as they enclose Raleigh's dead body within the trenches can represent the slow suffering in which the soldiers have to go through as they await their death. As Raleigh's body has been confined inside the dug out, the trench becomes more of a tomb for him as he has been buried within the wreckage just as Jesus was put in the tomb after he died. It almost pictures Raleigh as a sacrifice for war. In conclusion, Sherriff makes the ending of the play more dramatic and moving for the audience by cleverly manipulating the different staging techniques. By doing this he has made the setting and the language so authentic that it makes the audience feel apart of the play. Although he not intend it to be an anti war play, the ending has made people perceive otherwise. It is a mature representation of trench warfare as it captivates the audience leaving them with a nationalistic pride but with a weary uneasiness about war. ...read more.