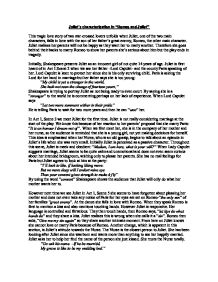 Juliet's characterisation in "Romeo and Juliet" This tragic love story of two star-crossed lovers unfolds when Juliet, one of the two main characters, falls in love with the son of her father's great enemy, Romeo, the other main character. Juliet realises her parents will not be happy as they want her to marry another. Therefore she goes behind their backs to marry Romeo to show her parents she's serious about him but the play ends in tragedy. Initially, Shakespeare presents Juliet as an innocent girl of not quite 14 years of age. Juliet is first heard of in Act 1 Scene 2 when we see her father -Lord Capulet- and the county Paris speaking of her. Lord Capulet is keen to protect her since she is his only surviving child. Paris is asking the Lord for her hand in marriage but her father says she is too young: "My child is yet a stranger in the world, She hath not seen the change of fourteen years;" Shakespeare is trying to portray Juliet as not being ready to even court. By saying she is a "stranger" to the world he is commenting perhaps on her lack of experience. When Lord Capulet says "Let two more summers wither in their pride" He is telling Paris to wait for two more years and then he can "woo" her. In Act 1, Scene 3 we meet Juliet for the first time. Juliet is not really considering marriage at the start of the play. We know this because of her reaction to her parents' proposal that she marry Paris: "It is an honour I dream not of". ...read more.

Juliet is impatient because this is a sort of test of Romeo's love to see if he will deceive his family, by marrying her. The Nurse leaves Juliet in suspense for a moment longer while she finds out if Juliet is going to confession: "Have you got leave to go to shrift today?" When Juliet replies, "I have." The Nurse puts Juliet out of her misery and fulfils her happiness when she finally tells her that she will wed Romeo later that day. "Then hie you hence to Friar Lawrence' cell, There stays a husband to make you a wife." At this, the scene comes to a close and we don't actually see the wedding but we lead to the wedding night. Once again Juliet is being impatient, in Act 3 Scene 2, but this time it is for their wedding night. She has promised herself to Romeo in marriage and now she wants to give everything to him. In Juliet's soliloquy she reveals the passion, which she feels for Romeo and the eager anticipation of the night of love she will share with him. She also speaks of speed implying that she wants the evening to come sooner so that she and Romeo can be together. Juliet uses imagery of horses pulling across the sun more quickly. I believe she is using horses as a sign of, once again, speed because she mentions, "gallop". She cannot wait to fulfil her duties as a wife; we know this when she says "Come, night, come, Romeo". She appears driven by the desire to make love to Romeo. Shakespeare is, again, implying how Juliet has changed from a girl to a woman as he says that her physical interest in Romeo is more mature than child like. ...read more.

Shakespeare leads the character through a variety of emotions before she takes her final action. She has many fears about the plan including doubts if the potion will work and if she wakes up too soon; "How if, when I am laid into the tomb,// I wake before the time that Romeo comes?" In this section Juliet's behaviour shows she is willing to do anything, even die, in order to be with Romeo. Everything else in her life has become unimportant, as she is totally consumed with finding a way to be with her love so she drinks the poison. This final speech shows her courage and strength of purpose as she contemplates the horrors she may face. Juliet then awakes and discovers Romeo's dead body beside her and the Friar standing over her. The Friar tries to make Juliet run away but here is when her true independence is shown. She will not leave Romeo and decides that, at this climax of tragedy, to chooses death in order to be with him. Her certainty over her decision is made clear when she says, "Yea noise? Then I'll be brief, O happy dagger!". Juliet's feelings are made clear that she has to be with Romeo because so completely has she embraced his love. Overall Shakespeare has presented a convincing portrait of Juliet, maturing from girlhood to womanhood, in the space of only five days but he still left a lot for the audience to judge. Juliet, in the end, is seen as brave young woman for defying her parents just for her love of Romeo. Her isolation from her friends and family and her overpowering love for Romeo has fuelled her determination, and instead of following orders from people she has made her own decisions and ultimately chose to end her own life. ...read more.