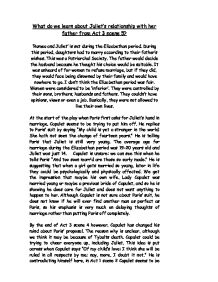 Juliets relationship with her father in Act 3 scene 5

What do we learn about Juliet's relationship with her father from Act 3 scene 5? 'Romeo and Juliet' is set during the Elizabethan period. During this period, daughters had to marry according to their father's wishes. This was a Patriarchal Society. The father would decide the husband because he thought his choice would be suitable. It was unheard of for women to refuse marriage, but if they did, they would face being disowned by their family and would have nowhere to go. I don't think the Elizabethan period was fair. Women were considered to be 'inferior'. They were controlled by their sons, brothers, husbands and fathers. They couldn't have opinions, views or even a job. Basically, they were not allowed to live their own lives. At the start of the play when Paris first asks for Juliet's hand in marriage, Capulet seems to be trying to put him off. He replies to Paris' suit by saying "My child is yet a stranger in the world; She hath not seen the change of fourteen years." He is telling Paris that Juliet is still very young. The average age for marriage during the Elizabethan period was 19-20 years old and Juliet was just 14. Capulet is unsure: we can see this when he tells Paris "And too soon marr'd are those so early made." ...read more.

Although she thanks her father for taking the time to arrange the wedding, Capulet does not want to hear it. He starts to shout. "How, how, how, how, chopp'd logic! What is this? "Proud" and "I thank you" and "I thank you not"; and yet "not proud." Mistress minion, you. Capulet refers to Juliet as a "minion," which means spoilt child. Capulet has reacted this way because they live in a patriarchal society where Fathers decide the husband so if a daughter refuses, in this society, he would have every right to be angry. Essentially, Juliet's refusal is unthinkable, almost like a slave refusing to do its master's bidding. Juliet is thankful about her fathers' request, but she is also upset about it. Juliet tries to talk to Capulet to calm him but he does not let her get one word in. Capulet, as we know from earlier, is not happy about Juliet's refusal. He shows this by using sarcasm and by quoting what Juliet has said, as we said above. Capulet's anger has now built into a rage. We have already heard him call Juliet a "minion". He then says to her "Or I will drag thee on a hurdle thither." A "hurdle" was a type of punishment on which prisoners rode on to the gallows whilst spectators watched and laughed at them. ...read more.

He says he is too upset that he can not talk. In describing her, touchingly, as "the sweetest flower in the field" we can see how much he cherished his daughter. Friar Laurence and Paris, along with some musicians now enter Juliet's room. Friar Laurence asks, as though he does not know of these happenings, "Come, is the bride ready to go to church?" Capulet replies "Ready to go, but never to return." Capulet is saying here that Juliet would have gone to church be married and return from church later that day. But now, Juliet will go to church to be buried, and never return. Capulet then turns to Paris and says "O son! The night before thy wedding- day hath Death lain with thy wife. There she lies, flower as she was, deflowered by him." Capulet is telling Paris that death has slept with Juliet before he could, before anyone could; but we the audience, know she had slept with Romeo, which makes this darkly ironic as well as a touching a poignant metaphor. Throughout the play, Capulet's relationship with Juliet demonstrates his pride and stubbornness. We can see that Capulet loves his daughter but by our standards he is excessive in his desire to control his daughters' life. Perhaps even by the standards of a patriarchal society, Capulet treats his daughter unfairly. ...read more.