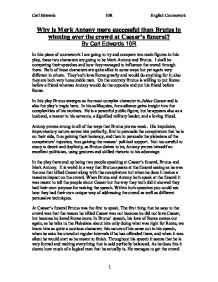 Why is Mark Antony more successful than Brutus in winning over the crowd at Caesar’s funeral?

In this piece of coursework I am going to try and compare two main figures in this play, these two characters are going to be Mark Antony and Brutus.  I shall be comparing their speeches and how they managed to influence the crowd through them.  Both of these characters are quite alike in some ways but yet again very different in others.  They both love Rome greatly and would do anything for it; also they are both very honourable men.  On the contrary Brutus is willing to put Rome before a friend whereas Antony would do the opposite and put his friend before Rome.

In this play Brutus emerges as the most complex character in Julius Caesar and is also the play’s tragic hero.  In his soliloquies, the audience gains insight into the complexities of his motives.  He is a powerful public figure, but he appears also as a husband, a master to his servants, a dignified military leader, and a loving friend.

Antony proves strong in all of the ways that Brutus proves weak.  His impulsive, improvisatory nature serves him perfectly, first to persuade the conspirators that he is on their side, thus gaining their leniency, and then to persuade the plebeians of the conspirators’ injustice, thus gaining the masses’ political support.  Not too careful to stoop to deceit and duplicity, as Brutus claims to be, Antony proves himself an excellent politician, using gestures and skilled rhetoric to his advantage.

In the play there end up being two people speaking at Caesar’s funeral, Brutus and Mark Antony.  It is weird in a way that Brutus speaks at the funeral seeing as he was the one that killed Caesar along with the conspirators but when he does it makes a massive impact on the crowd. When Brutus and Antony both speak at the funeral it was meant to tell the people about Caesar but the way they both did it showed they had their own purpose for making the speech. Within both speeches you could see how they had their own unique way of addressing the crowd as well as different persuasive techniques.

At Caesar’s funeral Brutus was the first to speak. The first thing that he says to the crowd was that the reason he killed Caesar was not because he did not love Caesar, but because he loved Rome more. In Brutus’ speech, his love of Rome comes out again, as he talks to the Plebeians about him only doing what was right for Rome, we know him as quite a cautious character; this nature of his came out in his speech, when he asks the crowd at regular intervals if he has offended them, and when it was silent he would start as he meant to finish. Throughout his speech it seems that he is very formal and making everything that is said perfectly balanced. As he does this it shows how much of a logical man that he actually is. He manages to get the crowd with simple persuasion, he does this by explaining to the Plebeians that he did what he did because it was necessary and for the good of Rome; also that he loved Rome as much as he did Caesar. He also uses the question, “If any, speak, for him have I offended;” this question is used so Brutus can check if the crowd is still on his side. He then pauses, to let the crowd speak, and he gets a positive outlook amongst the crowd.

Brutus manages to do an extremely good job at attempting to win the crowd over but he still doesn’t manage to do it yet. He explains how he loved Caesar but if it wasn’t for him dying then who knows what could have happened to Rome. He is upset that he had to kill his friend and tries to get this across when saying, “As Caesar loved me, I weep for him”, this manages to win the crowd over even more because it shows how sincere he actually is. He constantly explains how Caesar was not good for Rome because he was too ambitious and he is still mourning his friend’s death.

Brutus then leaves and allows Antony to come and speak to the crowd. He doesn’t realize how much of a great mistake he has made from letting Antony speak even though he was advised against it from the beginning. Just from his entrance where he is holding Caesar’s dead body in his arms manages to sway the crowd into his favour by playing on their emotions. Anthony’s speech is flooded with great emotion; this is the way he gets the crowd on his side. Anthony’s personality does come out a little; it is his crudeness which shows the most, as he used sarcasm and irony in the speech to persuade the crowd away from Brutus’ side. He starts his speech by saying that he wanted to bury Caesar not praise him which is what Brutus wanted. But then he starts talking about Brutus and the Conspirators sarcastically, especially when he says that he does not wish to lower Brutus’ honourable name, “but Brutus says he is ambitious, and Brutus is an honourable man”. When he says this you can tell the sarcasm straight away which shows Brutus that he made a mistake by letting Antony speak. Antony is trying his best to get a mutiny against the Conspirators because he wants revenge for Caesar’s death.

The fact that he keeps using repetition gains the attention of the crowd as he slowly manages to get rid of the fact that Brutus kept saying how much of an ambitious man Caesar was. This is done when he says how Caesar had refused the crown three times, how is it possible for a man to be ambitious when he keep refusing it; this is the point he is trying to get across. Also seeing as he has Caesar’s dead body with him this adds to his edge against Brutus. He manages to use the body as a kind of prop which brings out their emotional side which is exactly what Antony needed while making his speech.

Antony did have that leverage over Brutus with the body, but seeing as Brutus spoke first, this made him very influential on the Plebeians to begin with. As we saw earlier in the play the Plebeians were all on Pompey’s side until he died and then straight away switched over to Caesar. This means that when Caesar died, the person to kill him ended up being their favourite which was Brutus. This gave him the leverage before Antony even started to speak.

Knowing how much of a leverage that Brutus has on the crowd he has to use everything he can to get them onto his side. So he tries to entice the crowd by telling them about Caesar’s will. This will includes money to each citizen as well as Caesar’s own land to be used for a public park. This is what seemed to do it for Antony as it managed to get the crowd totally onto his side and made them mutiny which is exactly what he had wanted to begin with.

To conclude everything that I have written, Brutus and Antony’s speeches were a very important to the play as it decided what was going to happen next. They both had their own techniques of persuading the crowd, whether it was props or whether it was their own personal status among the people. Brutus had tried his hardest to make everything go his way but he had totally given it away by letting Antony speak, because Antony did something that Brutus didn’t do which was to appeal to the crowd’s emotional side. Brutus stood in one place where the crowd watched him and would have eventually gotten bored but seeing as Antony moved around, changed his voice and did many other things overall managed to win the crowd over Brutus.