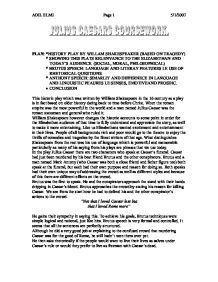 Julius Caesar - Compare the speaches of Brutus and Antony.

PLAN: *HISTORY PLAY BY WILLAM SHAKESPEAKER (BASED ON TRAGEDY) * SHOWING THIS PLATS RELENVANCE TO THE ELIZABETHAN AND TODAY'S AUDIENCE. (SOCIAL, MORAL, PHILOSOPHICAL) * BRUTUS SPEECH: LANGUAGE AND LITERAY FEATURES I.E USE OF RHETORICAL QUESTIONS. * ANTHONY SPEECH: SIMARLIY AND DIFFERNECE IN LANGUAGE AND LINGUISTIC FEAURES I.E SENSES, EMOTIVEAND PROSDIC. * CONCLUSION This historic play which was written by William Shakespeare in the 16 century as a play is in fact based on older history dating back to time before Christ. When the roman empire was the most powerful in the world and a man named Julius Caesar was the roman statesman and general who ruled it. William Shakespeare however changes the historic accounts to some point in order for the Elizabethan audience of that time to fully understand and appreciate the story, as well to make it more entertaining. Like us Elizabethans wanted excitement and entertainment in their lives. People of all backgrounds rich and poor would go to the theatre to enjoy the thrills of comedies and tragedies by the finest writers of that age. ...read more.

In asking a question like this, he's making it hard for the crowd to answer without making it seem as if they are traitors and to anyone insulted by his speech he poses the question; "Who is here so base that would be a bondman?" He stresses the point, by using emotive language, repeating the line; "If any speak, for have I offended" Then goes on to say: "I pause for a reply". This allows them to respond to his rhetorical questions, giving them an even greater sense that he cares about them and their opinions. They can only respond; "None, Brutus, none" They do not disagree or argue with his words or actions. Mark Anthony makes a big entrance with the body of Caesar. This has a huge impact on the crowd and Brutus is forced to leave before finishing his speech. Antony begins by explaining that all he wants is to bury Caesar, not praise him. Antonym says that he does not wish to disgrace Brutus' "honorable" name. ...read more.

Mark Antony is therefore able to show his emotion openly, passionately and unashamedly to the crowd. Brutus, on the other hand hides his feelings so can seem rather cold and dispassionate. Mark Antony uses another 'prop' Caesar's 'will' which he uses finally to entice the crowd by referring to the will, which offered seventy five drachmas to each citizen as well as Caesar's land to be used as a public park At first, the people were against Antony, due to Brutus' pervious speech. Antony did an excellent job of persuading the crowd and moving them which was his original purpose, Although it was Antony's appeal to the crowds emotion that ultimately swayed them to his side. In conclusion, both Brutus and Antony's speeches were very important to the drama so that their audience can see how easily manipulated the plebeians were. This enables Mark Antony to move the crowd to avenge Caesar's death through civil war and finally the suicides of Brutus and Mark Antony. ADIL ELMI Page 1 5/1/2007 ...read more.