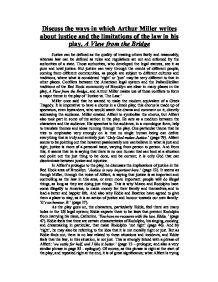 Justice and the Law in A View from the Bridge

Discuss the ways in which Arthur Miller writes about justice and the limitations of the law in his play, A View from the Bridge Justice can be defined as the quality of treating others fairly and reasonably, whereas law can be defined as rules and regulations set out and enforced by the authorities of a state. Those authorities, who developed the legal statutes, see it as pure and total justice. But justice can vary through the minds of different people, coming from different communities, as people are subject to different cultures and traditions, where what is considered 'right' or 'just' may be very different to that in other places. Conflicts between the American legal system and the Italian-Sicilian traditions of the Red Hook community of Brooklyn are clear in many places in the play, A View from the Bridge, and Arthur Miller makes use of these conflicts to form a major theme in the play of 'Justice vs. The Law.' Miller once said that he wanted to make the modern equivalent of a Greek Tragedy. ...read more.

And also why Eddie and Beatrice have agreed to give them a place to stay, as it is an action of justice and honour towards our own family: 'It's an honour, B.' (page 17). As the play goes on, the characters, particularly Eddie, feel there are many holes in the US legal system; Eddie expects there to be laws that prevent Rodolpho from marrying his niece, Catherine. 'You have no recourse with the law, Eddie.' (page 47). Eddie feels that there are certain characteristics of Rodolpho, his singing, cooking and dressmaking in particular, that make Rodolpho 'not right' (page 46). And by 'right', he may also be referring to the idea that it is not morally right or just. But as Eddie finds out, there is no law related to these situations and incidents, and Eddie feels that the law, in this situation, is not just. This is strongly linked with a phrase of Alfieri: 'we settle for half, and I like it better.' (page 12 - prologue; and also a very similar phrase in page 85 - epilogue). ...read more.

It is as if killing him would restore the balance of justice in their lives. As Alfieri would say, Marco has to settle for half, and abide by the law of not killing Eddie, although it is wrong in terms of his culture, traditions and background. This scene displays a lot of the conflicts between the Italian traditions of justice and the American legal system. Perhaps Miller is saying that legal systems do not bring about total justice, as they too were formed by humans with different ideas about justice, and not formed by God. So American law is not entirely right. In conclusion, it seems as though Miller does not believe in total justice on earth, and that no humans can ever have fully understand what justice is. He also forms ideas on how one's own personal ideas of justice can never really be formed, and we have to make a compromise between what is right and what we are allowed to do, thus negotiating between justice and law. Miller seems to be explaining limitations in the law as differences between cultures and their beliefs of total justice. ?? ?? ?? ?? ...read more.