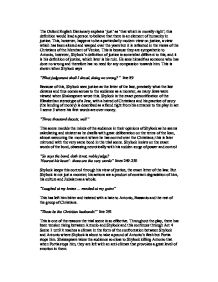 Justice in The Merchant of Venice

The Oxford English Dictionary explains 'just' as 'that which is morally right'; this definition would lead a person to believe that there is an element of humanity in justice. This, however, happens to be a particularly modern view on justice, a view which has been altered and warped over the years but it is reflected in the views of the Christians of the Merchant of Venice. This is because they are sympathetic to Antonio, however, Shylock's definition of justice is somewhat different to this, and it is his definition of justice, which later is his ruin. He sees himself as someone who has done no wrong and therefore has no need for any compassion towards him. This is shown when Shylock says "What judgement shall I dread, doing no wrong?" line 89 Because of this, Shylock sees justice as the letter of the law, precisely what the law dictates and thus comes across to the audience as a monster, as many Jews were viewed when Shakespeare wrote this. Shylock is the exact personification of the Elizabethan stereotype of a Jew, with a hatred of Christians and his practice of usury (the lending of money) is described as a fiend right from his entrance to the play in act 1 scene 3 where his first words are over money. "Three thousand ducats, well" This scene moulds the minds of the audience in their opinions of Shylock as he seems calculating and sinister as he dwells ...read more.

However what they each get is determined by their definition of justice. Shylock sees justice as exactly what the law dictates, and when it comes to his turn to be punished, he receives little mercy. Whereas the Christians, and everyone else in the court room, see justice as a concept which has to be enforced with mercy to produce fairness so when Antonio is being punished, they are constantly plaguing Shylock with pleas of mercy. " ...and then 'tis thought Thou'lt show thy mercy and remorse" lines 19-20 The mortification of Shylock continues throughout the trial scene with any character opposing him addressing him at some point or other as 'Jew' or another derogatory term, even Portia; emphasising the fact that the whole court is against him. Even at the beginning of the scene it is Shylock who has to explain himself to the Duke, rather than Antonio, who is officially in the wrong. In the first 15 lines of the scene, Shylock is described as "...an inhuman wretch" line 4 and "Go and call the Jew into the court" line 14 Shylock does not only have control over Antonio and therefore the rest of the Christians but also, until Portia catches him out, the court of Venice and the Duke. This occurs because Shylock, as well as Portia, knows that the bond cannot be merely broken, as this would lead to pandemonium in Venice. ...read more.

Not only does Portia show him the opportunities to be merciful but she speaks of it as well, promoting Shylock in vain "The quality of mercy is not strained" line 180 "...in the course of justice, none of us Should see salvation." lines 195-196 Portia leads him into the trap she has set this way; giving Shylock the opportunity to show mercy but with every opportunity he does not take, he digs his own grave deeper. Portia allows Shylock to believe that she is on his side right until he is about to cut Antonio where she prevents him using the very tactic Shylock had been using to punish Antonio: keeping to the exact words of the bond. "The words expressly are 'a pound of flesh'. Take then thy bond" lines 303-304 She still allows Shylock to have his pound of flesh, but states that " if thou dost shed One drop of Christian blood, thy lands and goods Are by the laws of Venice confiscate" lines 305-307 Shylock has been foiled by his own ways. The tables turn and as soon as Shylock hears this he goes back on his words, loosing face in the eyes of the audience, which shows that he is headed for a fall. Much like in any Shakespeare play, whenever a character becomes arrogant, they are setting themselves up for a great fall, and here is where the fall of Shylock truly arrives (as opposed to when Jessica runs away). ...read more.