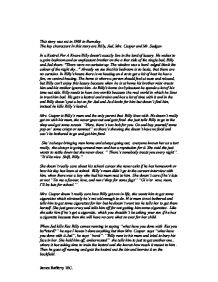 Kes. This story was set in 1968 in Barnsley. The key characters In this story are Billy, Jud, Mrs. Casper and Mr. Sudgen

This story was set in 1968 in Barnsley. The key characters In this story are Billy, Jud, Mrs. Casper and Mr. Sudgen In a Kestrel For A Knave Billy doesn't exactly live in the land of luxury. He wakes to a grim bedroom and an unpleasant brother on the other side of the single bed, Billy and Jud share: "There were no curtains up. The window was a hard-edged block the colour of the night sky..." Already we see that his bedroom is so basic, that there are no curtains. In Billy's house there is no heating and so to get a bit of heat he has a fire, no central heating. The home is where a person should feel at ease and relaxed, but Billy can't enjoy this luxury because when he is at home his brother miss-treats him and his mother ignores him. As Billy's home isn't pleasant he spends a lot of his time out side. Billy needs to have two worlds because the real world in which he lives in treat him bad. He gets a kestrel and trains and has a lot of time with it and in the end Billy doesn't put a bet on for Jud and Jud looks for him but doesn't find him, instead he kills Billy's kestrel. ...read more.

he says I haven't done anything but then Mrs. Casper says ''what have you done with it Jud'', he says ''nowt''. ''Billy runs to his mum and tried to bury his face in her. She held him off, embarrassed'' she tells him to just to get another one, where it has taking time to train the kestrel and she knows how much it meant to him. Then he goes off running and gets the kestrel out the bin and berries it on the backfield. Mr Farthing is the only character that is viewed as a positive influence on Billy. He is a good teacher to Billy he takes interest in him and tries to persuade him to get on with his work. Asking Billy how the cane was, like another teacher would say to Billy you've been bad like you al ways are, but Mr. Farthing ask him how it was ''`Sting?'' ''Not bad'' ''Right, sit down then'' FACT AND FICTION He asked Anderson to share a fact with us he shared one and then Mr. Farthing asks Billy he had head under the table inspecting his hands. His hands were pink and stinging. Mr. Farthing asks Billy to tell some stories ''Right, now you can do some work for a change. ...read more.

He never makes any attempt to get a kit, he either skives or borrows kits from other people, everyone else can seem to get a kit but Casper can't get one, Billy's mum wont buy him a kit. ''I don't know, sir. My mother says it's a waste of money, especially now I'm leaving.'' Mr. Sugden bounced the ball on Billy's head, he loves to humiliate him. He brings him back some giant shorts. ''Here Casper, get them on'' he threw them across them to the room they were huge, everyone and Billy knew they wouldn't fit him, ''they'll not fit me, sir.'' Everyone started laughing even Billy pulled off a little smile. His mum wont buy him a kit, because it's a ''waste'' of money, now that his leaving, but he hasn't been leaving for four years. ''you could of bought some out of your spending money, couldn't you?'' Billy doesn't really like football, so he's not really keen on it, that's why he probably didn't buy a kit. Every time he has P.E, Mr. Sugden always wants to do P.E. Mr. Sugden tells him to get a job but he's already got one but he cant buy a kit because he has to pay his fines for instalments every week because he gets in trouble all the time. ?? ?? ?? ?? James Rafferty 10C. ...read more.