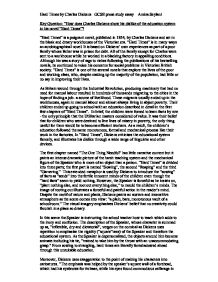 Key Question: How does Charles Dickens show his dislike of the education system in his novel Hard Times?

Key Question: "How does Charles Dickens show his dislike of the education system in his novel "Hard Times"? "Hard Times" is a poignant novel, published in 1854, by Charles Dickens and set in the bleak and dreary workhouses of the Victorian era. "Hard Times" is in many ways an autobiographical novel. It is based on Dickens' own experiences as part of a poor family whose father was in prison for debt. All of the family except for Charles were sent to a workhouse while he worked in a blacking factory in appalling conditions. Although his was a story of rags to riches following the publications of his bestselling novels, he continued to voice his concerns for social problems in Victorian British society. "Hard Times" is one of the several novels that explore the lives of the poor and working class, who, despite making up the majority of the population, had little or no say in improving their lives. As Britain wound through the Industrial Revolution, producing machinery that had no need for manual labour resulted in hundreds of thousands migrating to the cities in the hope of finding a job- a source of livelihood. These migrants usually ended up in the workhouses, again in manual labour and almost always living in abject poverty. Their children ended up going to school with an education described in detail in the first few chapters of "Hard Times". ...read more.

"You might hope to get some other nonsensical belief into the head of George Gradgrind, or Augustus Gradgrind, or John Gradgrind, or Joseph Gradgrind (all supposititious, non-existent persons), but into the head of Thomas Gradgrind - no, sir!" Here, Dickens is drawing attention to Gradgrind and the Utilitarian masters' opinion that belief was nonsensical as it wasn't a fact, it couldn't be seen or proved- therefore religion was wrong as believing in an unseen deity could not be proved. For a Victorian audience to read that the characters were not sufficiently Christian would have meant that they were either "heathen" or evil. Using this information, Dickens has made the utilitarian Thomas Gradgrind less endearing, to say the least. M'Choakumchild, another key character, is introduced with great ceremony by Thomas Gradgrind who is "much obliged," but Dickens barely hides his sarcasm and mockery as he lists the countless skills, talents and knowledge of M'Choakumchild. The listings of M'Choakumchild's accomplishments create an accumulative effect making them seem insignificant. Not surprisingly, Dickens is dismissive is of them, the side note in brackets: "He knew about all the watersheds of the world (whatever they are)"; Dickens' also believed that attempting to learn so much left little time to develop teaching skills. It is authorial intervention that speaks when he says, "If he had only learnt a little less, how infinitely better he might have taught much more," cements Dickens' belief that facts could never replace wisdom or the small joys of life. ...read more.

In other words, their childish innocence and dreams of a better future are taken away from them to leave them resigned and bitter. It is in the above way that Charles Dickens expresses his dislike of the educational system. He uses a range of literary devices such as repetition for emphasis, allusion to illustrate his ideas and irony for humour but also to make the reader think. The use of false logic is an example of this: Dickens' characters may argue about fanciful literature but he using it to craft his story. His characters may be exaggerated but they are also entertaining: from the Speaker's square personality and appearance to Bitzer whose life has been sucked out of him. I think Charles Dickens has been successful in expressing his point of view because the average reader begins to understand his ideas and reasons through the use of hyperbole even if it may be inaccurate. The evidence also lies in the positive literary and social criticism Dickens received in his own Victorian era from other prolific writers such as George Bernard Shaw and its influence in changing the social climate for the poor of Britain. Dickens important beginning chapters make the reader agree with him when he said,"If you would reward honesty, if you would give encouragement to good, if you would stimulate the idle, eradicate evil, or correct what is bad, education -- comprehensive liberal education -- is the one thing needful, and the one effective end." ?? ?? ?? ?? Hard Times by Charles Dickens GCSE prose study essay Amina Seylani ...read more.