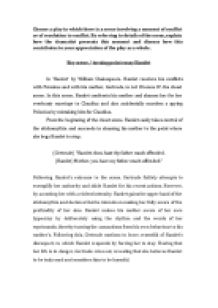 ﻿Choose a play in which there is a scene involving a moment of conflict or of resolution to conflict. By referring to details of the scene, explain how the dramatist presents this moment and discuss how this contributes to your appreciation of the play as a whole. Key scene / turning point essay Hamlet In ?Hamlet? by William Shakespeare, Hamlet resolves his conflicts with Polonius and with his mother, Gertrude, in Act III scene IV, the closet scene. In this scene, Hamlet confronts his mother and shames her for her overhasty marriage to Claudius and also accidentally murders a spying Polonius by mistaking him for Claudius. From the beginning of the closet scene, Hamlet easily takes control of the stichomythia and succeeds in shaming his mother to the point where she begs Hamlet to stop. (Gertrude) ?Hamlet, thou hast thy father much offended. (Hamlet) Mother, you have my father much offended.? Following Hamlet?s entrance to the scene, Gertrude futilely attempts to exemplify her authority and chide Hamlet for his recent actions. ...read more.

I took thee for thy better.? In this scene, the audience witnesses Hamlet?s first impulsive action of murdering Polonius to which Hamlet shows no regret nor remorse as he believes that Polonius brought his own death upon himself. He believes Polonius? death is justified as Polonius has proven to be perniciously meddlesome in his life and also played a central role in the demise of his relationship with Ophelia. Consequently, by stabbing Polonius, Hamlet commits himself to overt, violent action, which brings him into unavoidable conflict with the King. In Hamlet?s monologue, he attempts to resolve the conflict with his mother by scolding her through emphasising the stark contrasts between her late husband and Claudius. ?Look here upon this picture? Hyperion?s curls, the front of Jove himself? This was your husband. Look you now what follows. Here is your husband, like a mildewed ear.? In his monologue, Hamlet attempts to make Gertrude aware of her vast villainy and to make her feel guilty for it. ...read more.

He is halted only by the appearance of the ghost. In this scene, the ghost of King Hamlet makes his second appearance to reinvigorate Hamlet into completing his revenge on Claudius and to order him not to harm his distressed mother. ?Do not forget. This visitation Is but to whet thy almost blunted purpose? Oh step between her and her fighting soul. Conceit in weakest bodies strongest works. Speak to her, Hamlet.? Hamlet initially believes that the ghost has come to chide his tardy son into carrying out the revenge, however, through the ghost?s request for Hamlet to intercede and comfort his mother, who is overwrought by her son?s accusations, it is clear that the ghost also acts as his mother?s protector. Seeing nothing herself, Gertrude believes that her son is mad but Hamlet assures her that he has never been mad but has merely feigned madness all along. Before leaving his mother, Hamlet urges her to forsake Claudius and not to reveal that his madness is an act. ...read more.