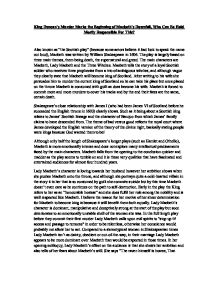 King Duncan's murder marks the beginning of Macbeth's downfall, who is mostly responsible for this?

King Duncan’s Murder Marks the Beginning of Macbeth’s Downfall, Who Can Be Held Mostly Responsible For This?

Also known as “the Scottish play” (because some actors believe it bad luck to speak the name out loud), Macbeth was written by William Shakespeare in 1606. The play is largely based on three main themes, them being death, the supernatural and greed. The main characters are Macbeth, Lady Macbeth and the Three Witches. Macbeth tells the story of a loyal Scottish soldier who receives three prophecies from a trio of ambiguous witches, and although vague they clearly state that Macbeth will become king of Scotland. After writing to his wife she persuades him to murder the current king of Scotland so he can take his place but once placed on the throne Macbeth is consumed with guilt as does become his wife. Macbeth is forced to commit more and more murders to cover his tracks and by the end their fates are the same, certain death.

Shakespeare’s close relationship with James I (who had been James VI of Scotland before he succeeded the English throne in 1603) clearly shows. Such as it being about a Scottish king relates to James’ Scottish lineage and the character of Banquo from which James’ family claims to have descended from. The theme of bad versus good reflects the royal court where James developed the English version of the theory of the divine right, basically stating people were kings because God wanted them to be!

Although only half the length of Shakespeare’s longer plays (such as Hamlet and Othello), Macbeth is more emotionally intense and does not explore many intellectual predicaments faced by the main characters. Macbeth falls from the opening to the conclusion quicker and madder as the play seems to tumble on and it is these very qualities that have fascinated and entertained audiences for almost four hundred years.

Lady Macbeth’s character is loving towards her husband however her ambition shows when she pushes Macbeth onto the throne, and although she portrays quite a cold-hearted villain in the story it is her that is so consumed by guilt she commits suicide but by this time Macbeth doesn’t even care as he continues on the path to self-destruction. Early in the play the King refers to her as an “honourable hostess” and she does fulfil her role among the nobility and is well respected like Macbeth. I believe the reason for her motive of her sheer determination for Macbeth to become king is because it will benefit them both equally. Lady Macbeth’s character is dominant, manipulative and deceptively strong at the start of the play but soon deteriorates to an emotionally unstable shell of the woman she was. In the full length play before they commit their first murder Lady Macbeth calls upon evil spirits to "stop up th' access and passage to remorse" in order to be relentless, otherwise her conscience would probably not allow her to act. Compared to a stereotypical woman in Shakespearian times Lady Macbeth isn’t as dainty, obedient or out-of-the-way, in their marriage Lady Macbeth appears to be more dominant over Macbeth than would be expected in those times. In her opening soliloquy, Lady Macbeth’s effect on the audience is that she shows her ambition and also tells of her fears about Macbeth’s will. She says “The raven himself is hoarse, That croaks the fatal entrance of Duncan Under my battlements” which she is basically asking for the strength to commit Duncan’s murder. This soliloquy shows her deepest psychological yearnings to the audience. This soliloquy shows that Lady Macbeth is extremely diabolical as she knows that the witches are right all she has to do is murder Duncan for her husband to become king. It reveals that Macbeth is "too full o' the milk of human kindness" and how she plans to "chastise him with the valour of her tongue" to fulfil their ambitions. It shows that although Macbeth is a strong noble military commander he is easily manipulated by his wife and she uses this to her advantage. After this soliloquy we know that without the “courage” that Lady Macbeth gave to Macbeth he probably would not have gone through with the murder. This concludes that although she wasn’t entirely responsible for the downfall of Macbeth she did in fact play a big part in it and what she didn’t realise was that she changed Macbeth for the worst. This soliloquy is essential to not only the plot but to the character development as well.

Introducing the three witches was a twist in the plot and people in Shakespearian times would have believed in these characters because it was “that” time. The witches appear intimidating and obscure at the beginning thy chant “Foul is fair, fair is foul” this means that things are not as they seem which points to many evens that occur during the play, such as later when Macbeth is told Birnam Wood will move and it starts to move when Macduff and the English army use the wood as camouflage. When the witches tell Macbeth of their three predictions they set off a chain reaction which is their purpose I believe. Their appearance is foul but their purpose is fair, they are merely a catalyst of the actions that follow because sooner or later Lady Macbeth would’ve figured out that with Duncan dead Macbeth had a shot at being King. But notifying Macbeth of their prophecies ultimately sets off the actions then carried out, namely King Duncan’s death. In act 4 Macbeth goes back to the witches and they tell him of further prophecies. The first is an armoured head which can mean many interpretations one being Macduff’s head as the witches say “He knows thy thought” meaning it would be ironic if the head was Macbeths. Then the witches warn Macbeth of the “Thane of Fife” in other words Macduff although then they state that no man born of woman will kill Macbeth and later on it is discovered that Macduff was a caesarean section so technically was not born of woman. The third apparition is of a crowned child with a tree in his hand and from this I draw my own interpretation. That is when Malcolm (Duncan’s son) fled to England and told Macduff of Macbeth’s tyranny, so according to the prophecy Banquo’s son Fleance was to become king (so that explains the child with crown) so to put him on the throne they have to fight Macbeth so Macduff leads the English army to war and uses Birnam wood as a cover which explains the tree! Later the witches state “Macbeth shall never vanquished be, until Great Birnam wood to high Dunsinane hill, shall come against him” to which Macbeth replies “That will never be. Who can impress the forest, bid the tree Unfix his earth-bound root?” meaning that the witches told him you won’t die until the wood moves and he replies that’ll never happen by a man who was not born of woman! But because they are so vague the reader cannot predict what will happen as the story has a lot of twists. I believe they told Macbeth the predictions at first out of sheer amusement. They acted as a catalyst of events so they cannot be held mainly responsible for the downfall of Macbeth however they did bring it forward and they did little to stop it.

Macbeth starts out as a loyal soldier who is happy but as the story goes on he changes. He is first introduced as a hero but after meeting the witches he gets a bit confused but as soon as Lady Macbeth influences him he is then turned to a desperate man caught between the woman he loves and the man he serves even though the woman he loves says she’d have the guts to bash her own baby’s head in! Macbeth obviously then turns doubtful after the murder because he’s so consumed by guilt however he quickly changes to a much more malevolent character after being placed on the throne Macbeth attempts to have his best friend Banquo and his son killed (to prevent the witches other prophecy of that Banquo would be the father of the King of Scotland after Macbeth and for this to happen Macbeth would have to be killed) and the murderers Macbeth hires succeed in killing Banquo however Fleance escapes. So by this time Macbeth is so far past sanity that he doesn’t even flit an eyelid or shed a tear when Lady Macbeth kills herself because of the fact she cannot bear to live with her guilt. Once Macbeth revisits the witches and comes back assured that no one will kill him but just to be sure as his confusion clouds his judgement he sends for more people to be killed. This time those being Macduff’s family, however Macduff isn’t there as he’s gone to England and his entire family is slaughtered. Macduff’s cousin is Ross who acts as a messenger for Macbeth and tells of Macbeths plans so then they gather the army and attack Macbeth’s castle then Macbeth is killed by Macduff. But Macbeth’s so sure that no man can kill him that he shows no fear. However once Macduff tells he was “cut from his mother’s womb” that is when the real fight begins which ends with Macbeth being beheaded! Going back to the murder of Duncan, Macbeth was pushed to do this by his deceptively strong wife who calls him a coward if he refuses to go through with it. For the murder of Duncan I hold Lady Macbeth and the three witches mostly responsible however his following downfall I blame mostly Macbeth because at the end of the day we are all responsible for our own actions and the following murders he committed were of his own free will and his fate would’ve differed if he had been a good king instead of a martyr.

Macbeth’s fate is the same as all of Shakespeare’s main character’s fates; death. The play ends like this because it shows that despite all his efforts Macbeth had only one fate and the moral this story holds I think is that people can change and not always for the better. Macbeth’s downfall was his fault and his fault only because everyone is responsible for their own actions and no one made him become a tyrant. Although the witches sped it all up and Lady Macbeth pushed him in the right direction Macbeth still had the choice to stay loyal and instead chose his own fate.