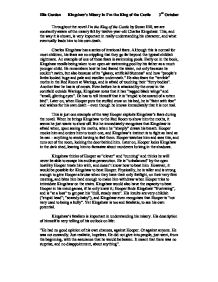 Kingshaw's Misery in I'm the King of the Castle

Throughout the novel I'm the King of the Castle by Susan Hill, we are constantly aware of the misery felt by twelve-year-old Charles Kingshaw. This, and the way it is shown, is very important in really understanding his character, and what eventually leads him to his own death. Charles Kingshaw has a series of irrational fears. Although this is normal for most children, his fears are so crippling that they go far beyond the typical childish nightmare. An example of one of these fears is swimming pools. Early on in the book, Kingshaw recalls being taken to an open-air swimming pool by his father as a much younger child. He remembers how he had feared the water, not only because he couldn't swim, but also because of its "glassy, artificial blueness" and how "people's limbs looked huge and pale and swollen underneath." He also fears the "terrible" moths in the Red Room at Warings, and is afraid of touching their "furry bodies". Another fear he has is of crows. Even before he is attacked by the crow in the cornfield outside Warings, Kingshaw notes that it has "ragged black wings" and "small, glinting eyes". ...read more.

Kingshaw's fatalism is important in understanding his misery. His description of himself is very telling of his outlook on life: "He had no good opinion of his own chances, against Hooper. Or against anyone. He was not cowardly. Just realistic, hopeless. He did not give into people, just went, from the beginning, with the assurance that he would be beaten. It meant that there was no surprise, and no disappointment, about anything". At many points in the novel, Kingshaw has moments of genuine happiness, in which he feels untouchable and in control. This is reflected in the title of the book itself, and in a later chapter in the book in which he actually climbs to the top of an ancient ruin of a castle. However, this euphoria never lasts, and he falls from his "castle" every time- all because of his own refusal to fight against what he feels is inevitability; Hooper will always beat him, he will never win. We see these moments of happiness and his sudden snap back to reality multiple times: when he discovers his secret room in Warings and Hooper finds it, so he decided to just let him in; when he ventures on his own into the woods and Hooper follows ...read more.

There is also some informal language which pulls the reader into this child's world, and endears us to him. An example of this is his thought that, "It always took longer than you expected, walking." This makes us feel Kingshaw's misery more during his moments of extreme terror. During these times the sentences get longer, punctuated by a series of commas, indicating a panicked, frantic train of thought: "He sweated a little, twisting this way and that, and reaching his left arm round behind him, to try and unhitch the string." This clearly shows us his raw, desperate fear. Rather than using lots of emotive, descriptive narration, which could detract focus from Kingshaw's character, the writer has us experience I'm the King of the Castle through Charles Kingshaw's feelings, experiences and memories. This is very effective as it lets us become more and more involved in Kingshaw's character; our attachment to him builds up into a climax throughout the novel until he ultimately commits suicide. When this happens our hopes fall as Kingshaw did so many times before and does now, one final time. ?? ?? ?? ?? Ella Gordon Kingshaw's Misery in I'm the King of the Castle 3rd October ...read more.