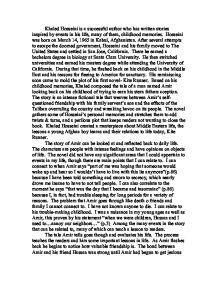 Khaled Hosseini is a successful author who has written stories inspired by events in his life, many of them, childhood memories. Hosseini was born on March 14, 1965 in Kabul, Afghanistan. After several attempts to escape the doomed government, Hosseini and his family moved to The United States and settled in San Jose, California. There he earned a bachelors degree in biology at Santa Clara University. He then switched universities and earned his masters degree while attending the University of California. During that time, he flashed back on his childhood in the Middle East and his reasons for fleeing to America for sanctuary. His reminiscing soon came to mold the plot of his first novel- Kite Runner. Based on his childhood memories, Khaled composed the tale of a man named Amir looking back on his childhood of trying to earn his stern fathers aception. The story is an intense fictional tale that weaves between Amir's self-questioned friendship with his family servent's son and the effects of the Taliban overruling the country and wreaking havoc on its people. ...read more.

The tale Amir tells goes though and evaluates his life. The process teaches the readers and him some important lessons in life. As Amir flashes back he begins to notice how valuable friendship is. The bond between Amir and his friend Hassan was strong until Amir had begun to get jealous of his father's closeness to Hassan. When Amir acted to tried get Hassan do leave his father alone he actually ends up causing Hassan and his father to leave all together; Amir never sees him again afterward which dug at his conscience. "I thought of the life that I lived until the winter 1975 came along and changed my life forever" (p.2) he spoke while reflecting on his acts. In feeling terrible about his lying, he spoke of his friend's banishment only saying "I was sorry, so sorry..." (P.109) The importance of loyalty and truth are major elements of the plot. Nearly every character holds a secret in the novel, whether it is revealed to other characters or not. Promises made between people and the phrase "for you a thousand times over" (p. 67, p. ...read more.

His past life has given him things to tell others on how to deal real life situations. His story of The Kite Runner has realistic fictional characters that go through things that many actual people have lived though. He sends feelings through his writing by making emotional connections with his audience of readers. His use of schooling readers not to lie and teaching the outcome on the matter helps make the book more of a lesson in life, rather than a method of entertainment. When the story is told to you as in depth as it is told, hearing quotes from other role model characters and seeing how they effected how Amir lived his live, has an impact on the reader. The hidden messages placed by Hosseini, in the story, give a sense of feeling towards Amir, and a mental connection to the reader's life situations, whether they be later or in the future. Overall, The Kite Runner is a beautifully pieced, fictional story that's lived in the life of a Middle Eastern child growing up, his learning from his mistakes, and the passing on of his life's lessons. ...read more.