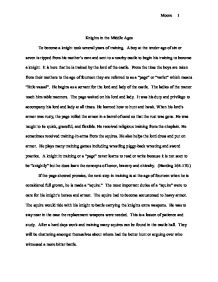 Knights in the Middle Ages.

Knights in the Middle Ages To become a knight took several years of training. A boy at the tender age of six or seven is ripped from his mother's care and sent to a nearby castle to begin his training to become a knight. It is here that he is trained by the lord of the castle. From the time the boys are taken from their mothers to the age of fourteen they are referred to as a "page" or "varlet" which means "little vassal". He begins as a servant for the lord and lady of the castle. The ladies of the manor teach him table manners. The page waited on his lord and lady. It was his duty and privilege to accompany his lord and lady at all times. He learned how to hunt and hawk. When his lord's armor was rusty, the page rolled the armor in a barrel of sand so that the rust was gone. He was taught to be quick, graceful, and flexible. He received religious training from the chaplain. He sometimes received training-in-arms from the squires. He also helps the lord dress and put on armor. He plays many training games including wrestling piggy-back wresting and sword practice. A knight in training or a "page" never learns to read or write because it is not seen to be "knightly" but he does learn the concepts of honor, bravery and chivalry. ...read more.

Feudalism was also used as trade. The boys were promised to lords for protection as a trade off. These boys were to become knights after swearing an allegiance to a lord for their fathers to receive help from the said lord (Corrick 10-11.) The code of Chivalry is a code that people in the court were supposed to live by and probably everyone thought or pretended they did live by those laws. Like all societies the laws that are supposed to be followed do not always get followed. Chivalry laws were difficult to follow because they were a lot of them. A knight had to keep his word no matter what and even remember to follow these laws while in battle. A knight could try to escape if captured and they had to be kind to their defeated enemies. These were probably two of the toughest laws to obey (Blackwood.) Medieval warriors used many kinds of weapons. For example, a knight's favorite weapon was his sword. There were many kinds of swords, such as the great sword. Great swords were two handed swords. They were larger versions of the ordinary sword. They were swung with both hands to deliver a powerful blow. Large swords began to become popular in the 13th century. A knight would hang a sword in his saddle in addition to his regular sword. Knights used a weapon called a lance. ...read more.

Chivalry holds true when Arcite wins the battle and then falls off his horse and dies. With his dying breath says that he would love for the Emily to be with Palamon. This is the model of chivalry and of sportsmanship (Hussey.) "For a man's glory, then, is it best to die when he is highest in fame. To think the contrary of all this is willfulness" (Tatlock 51.) I thought it odd that when Arcite prayed to Mars to win the battle that Saturn decided the fate of both men at that moment. But in all reality both men lived and died as they should of, Arcite, the honorable knight, the hero, the winner of the battle. Palamon, the honorable knight, the lover, the winner of Emily's hand and heart. In my readings of King Arthur, The Mists of Avalon in particular the knights did not always show this compassion. When Uther Pendragon disguised himself as the Duke to create a child, this child the future King Arthur was nothing but deceitful. He showed no honor or compassion for the Duke. They do not demonstrate any kind of qualities that a person living under the chivalric code should live by. Truth be told not all knights were corrupt but a good majority of them were. These two readings of the same time period are contradictory. I am quite sure as with any story that we read or are told there are many sides - good and evil, true and false. After all they are stories left for us to pick apart and explore for entertainment, knowledge, history and understanding. ...read more.