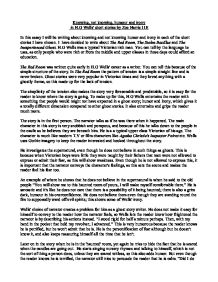 knowing and not knowing humour and iriony in H.G Wells' short stories

Knowing, not knowing, humour and irony in H.G Wells' short stories by Zoe Harris 11E In this essay I will be writing about knowing and not knowing humor and irony in each of the short stories I have chosen. I have decided to write about The Red Room, The Stolen Bacillus and The Inexperienced Ghost. H.G Wells was a typical Victorian rich man. You can tell by the language he uses, as only people who were rich or from the middle and upper classes in those days could afford an education. The Red Room was written quite early in H.G Wells' career as a writer. You can tell this because of the simple structure of the story. In The Red Room the pattern of tension is a simple straight line and is never broken. Ghost stories were very popular in Victorian times and they loved anything with a ghostly theme, so this made up for the lack of tension. The simplicity of the tension also makes the story very foreseeable and predictable, so it is easy for the reader to know where the story is going. To make up for this, H.G Wells entertains the reader with something that people would might not have expected in a ghost story; humor and irony, which gives it a totally different dimension compared to other ghost stories. ...read more.

The Stolen Bacillus is a little bit more complex by comparison. H.G Wells uses the third person narrative in this story. There is no tension at the beginning of The Stolen Bacillus, but then it goes up and down through the story. It is very unpredictable compared with The Red Room which has a very steady pattern of tension. The tension goes highest at the point when the terrorist gets away and drinks the liquid. The visitor is presented as a stereotypical untrustworthy character, also everything he says points towards him being an Anarchist. He is a very sly, shifty character, "Pale man"...... "Limp white hands"......."Lank black hair and deep grey eyes." so by this description we get the impression there is something odd about him. The scientist can't tell what the stranger is thinking but the reader can; this adds humour throughout the story. Wells misleads the reader right at the beginning of this story by making the Bacteriologist pretend that he doesn't know the man is a terrorist. Wells makes us believe that we know more than the Bacteriologist, but the trick is we don't. He fools the reader and the terrorist by making them think it's cholera in the test tube, so when he tells us this, we believe it. ...read more.

Also the way the ghost died is very humorous, as he died investigating a gas leak while he was holding a candle. Clayton mocks him because of this, and the reader knows this is a very silly thing to do. Wells shows Clayton's confidence because it makes the character more amusing, "I'm not joking. I mean what I say". He has no doubts, he keeps on smiling and this makes the reader's think they know what is going to happen. Even in the end he is still smiling which adds a further ironic element to the story. When they all find out about the hand symbols/gestures, different sides are taken; some believe and some don't. This is when the clock strikes midnight (so the atmosphere is set), Clayton was totally oblivious that he would drop down dead. To pass from the living world to the world of spirits you have to be a ghost, therefore you have to be dead. This makes it ironically humorous because you don't know how its going to end until you read the very last sentence. H.G Wells makes his stories different and more exciting by injecting humour and irony into them. That is why when you read his stories you get interested and hooked and want to read more. ...read more.